If you listen to Comedy Bang! Bang!, you know the Andy Daly characters get really fleshed-out, in part because Paul F. Tompkins, Jason Mantzoukas and Scott Aukerman ask leading questions.

You can do the same in scenes. When you ask leading questions, your scene partner now has to accept that reality and build out from there.

It’s like the press conference game. You’re basically endowing the character, and you just keep endowing them. For example:

Player #1: So, John, you wrote a book called Starting when you started drinking. I noticed the last chapters are just random type. Do you really feel like this has helped your life?

Then the person has to respond. It forces them to realise that those are true things now, because the other person said them. So it’s “yes-ing” and it’s “and-ing.” It’s forcing you to go, “Yes, this is fucking real, so just accept it.”

When Player #1 says, “Oh and there’s a whole chapter on how to start embezzling,” that feels like the wrong path, and you’d have to explain why, in your book, it’s a valuable thing to start doing.

Where it gets fun is, it’s really about surprising the other person. So like, “I notice you wear a live raccoon as a hat. Does that help with writing, or are you also into fashion?” And then they can be like, OK, I wear a live raccoon, how do I explain that? Or, “I see you’re not wearing pants.”

What you want is for them to almost laugh the word “Yep,” and then follow up with “Here’s why, and here’s how that happened…”

Player #2: Yes. The man and the moustache.

Player #1: For your birthday gift, on twitter you said that you wanted people to send you their used Kleenex. For eating. Was that a joke, or do you actually eat tissues?

Player #2: I do. I feel like the fibre market is expanding…

Player #2: Well, people are germophobes now. Everyone’s carrying around their little bottle of Purell, and it’s actually leading to a very unhealthy and more dangerous society. We need to get more germs into our bodies in order to be healthier.

To get started, you might endow someone’s character, but then as they “yes, and” it, they’re going to say things that in turn you can feast on.

So if you say you’re into Paleo, I’ll think, to what extreme are you like a caveman? You know what, I’ll test this out by saying, “I notice you slaughtered the neighbours’ dog and ate it, and you also drag your wife around by the hair.” I’m not making you say those things; you said you were big on the Paleo thing, now let’s really go 100% on it.

Try it at your next rehearsal. 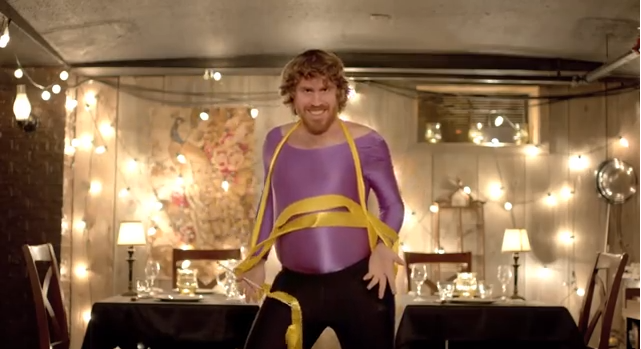 Improv attracts some very smart, very funny people, each with their own unique style. You can learn a lot just by studying how your fellow improvisers perform. Here are some of our faves:

Most of us have a go-to on stage; some back-pocket character we can pull out if we start to panic.

He’s equally comfortable being low or high status, male or female, hyperbolic or grounded and real. What’s more, Matt’s talent for accents is nothing short of astonishing. He does Southern, New York, Jamaican, Italian, Liverpudlian, German, Australian, Spanish, and dozens more so flawlessly, you’d swear he was born there.

Kurt Smeaton finds something playful in everything, no matter how small or mundane. His ability to turn straightforward scenes into something Spielberg-ian is awe inspiring:

• He once played an entire village of people running from an exploding volcano. One character saved the day by stopping the lava with his bare hands, then rolling it up like a rug.

• His motorcycles sound like horses. He once rode one into a scene, kicked it and gave a “Yaarrr!” to send the bike on its way.

• After initiating with “The end of the world is nigh!” he mimed handing things out to passersby. What would have been flyers in someone else’s hands became “Frisbees! Get your end-of-the-world Frisbees here!”

Mark Meer is the king of transformation. Watching him perform The Harold of Galactus is a master class in character and physicality.

His characters are always strongly defined; once he establishes them, they’re instantly recognizable later on. In one swift motion he transforms from a stiff-spined butler, to a hunchbacked gnome, to a drug-addled lunatic and back again.

Jet Eveleth, Becky Johnson and Isaac Kessler all have strong elements of clown in their playing style.

There’s a fluidity, vulnerability, and openness to whatever is happening on stage that characterizes their performance. Nothing is off limits, no move is too risky. (That’s him as a ribbon-twirling gymnast in the photo.)

Sarah Hillier has a childlike, mischievous quality that makes every scene sparkle. Her playfulness is infectious: she has an ability to make scene partners corpse like no one we’ve seen.

If you’re the kind of improviser who likes rules and order, beware. The only thing predictable about Sarah’s performance is that it’ll be wicked funny. (Click here for a glimpse of her as Arya Stark.)

The Wild Card comes out of nowhere and fucks with reality. Andy Daly, Rob Baker, Devon Hyland, and Cameron are all Wild Card players.

On his improvised podcast, Andy Daly and Matt Gourley played water-skiers, with Andy standing on Gourley’s shoulder to form the top of a human pyramid.

“I got your foot tattooed on my shoulder!” said Matt.

Without missing a beat, Andy replied, “Yeah, I had no idea you were gonna get that till I saw you.”

With one small move, he shifted time and smashed preconceptions. Suddenly Gourley’s character had to justify getting a foot tattooed on his shoulder before Andy’s character stood on it, which is hilarious. When the world you thought you were seeing is turned upside down, you’re watching a Wild Card.

Some performers stand out for their ability to blend in. While everyone else is larger-than-life, the Everyman quietly plays in the spaces between, often the scene’s voice of reason.

That doesn’t mean the Everyman is boring. Far from it. Because he (or she) plays so many roles with ease, they can do weird stuff like this and be totally believable.

We had to make a category for this rare, sometimes terrifying improviser. Jason Mantzoukas is one. So is Alex Tindal.

The Kraken is fearless, owning the stage the moment they set foot on it. Like the Clown, they don’t flinch from what’s happening, but rather, turn it up to eleven.

We witnessed Mantzoukas play a psychopath at the Friars Club Improv & Sketch Competition. His character took Ed Herbstman’s hostage, raped him (in real time), then shot an audience member in the head. If that doesn’t sound funny, it wasn’t. But it was electrifying, honest, and completely unforgettable.

The intent isn’t to mimic your favourite performers, but to find ways you can bring as much commitment and passion as they do to every set.

Carpe Momentum: Forget The Day And Just Seize The Moment

Think of your favourite improv scene ever. (If that’s too hard, the best one you’ve seen recently.)

Whether it featured a couple of co-workers, conjoined twins, or the Ikea monkey and his Mom, I’ll bet dollars to donuts it wasn’t about a “special day.”

Many of us were taught every scene should be “Today is the day that…” Unfortunately, that can lead to forced or clichéd scenes.

“Today’s the day we’re finally going to get married!”

“Today’s the day I quit my job to become an astronaut!”

“Today’s the day I win the Nobel Peace Prize!”

And if the what turns out to be nothing more than discovering a woman has married an exact carbon copy of her shouty father (as happened in one of my favourite scenes), that’s just fine.

“Be so believable it hurts. Don’t just play the idea of the scene. Dive deep into the scene. The relationships are what’s important. Simple scenes are all you need; it doesn’t have to be ‘about’ something.” – Greg Hess

If you can get your hands on a copy, watch TJ and Dave’s show entitled Before The Party. The entire 50-minute set revolves around two guys getting ready for some kind of shindig.

We never actually find out what happens at the party. Who cares? It’s all about these two characters, from their music choices to their fear of failure with women.

The more you focus on what’s happening right now, the more we’ll lean in to learn more.

Jason Mantzoukas’s one-man Hermit show (described here) is another great example. While it did turn out to be an unusual day, he didn’t start by declaring that right off the top.

Instead, the scene built to a climax slowly and methodically. And how much more powerful was it because the audience discovered the “what” with him?

When you’re fully present and immersed in what’s happening on stage, you’ll create something people remember – because they experienced it too.

David Kantrowitz has been illustrating respected improvisers’ quotes, with some stunning results. You can follow David’s tumblr here. 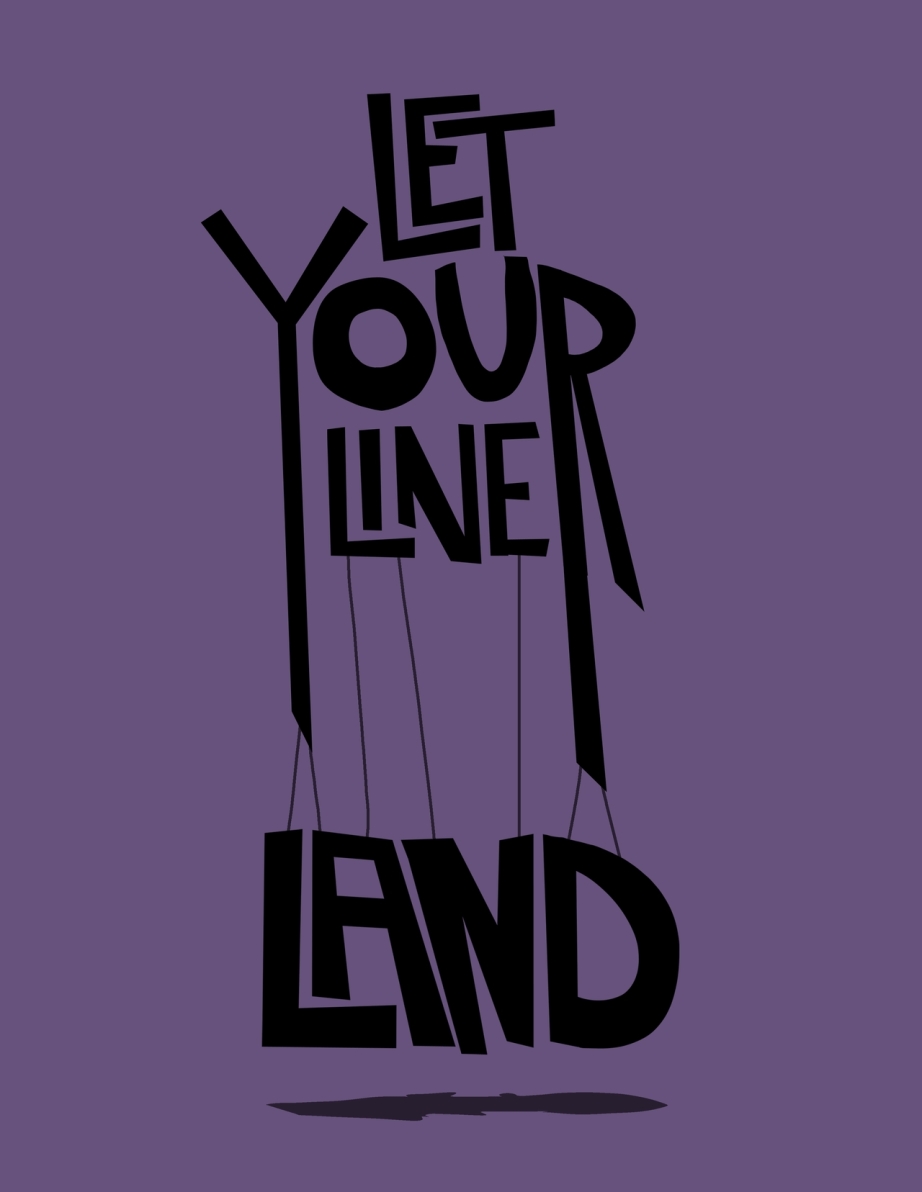 Downright Upright is an improv blog by LA-based improviser, Sean London. Its focus is unabashedly UCB-centric, and that’s cool, because it’s fun to get an insider’s perspective on that scene.

London posts an interesting mix of personal “ramblings,” interviews and opinions, as well as great video content. I especially liked his review of a solo Jason Mantzoukas show. Already something of a legend in the States, Mantzoukas is known for pushing the boundaries of improv – and his audience – to the limits.

When he’s not busy blogging, you can catch London performing with Soulmates (below). 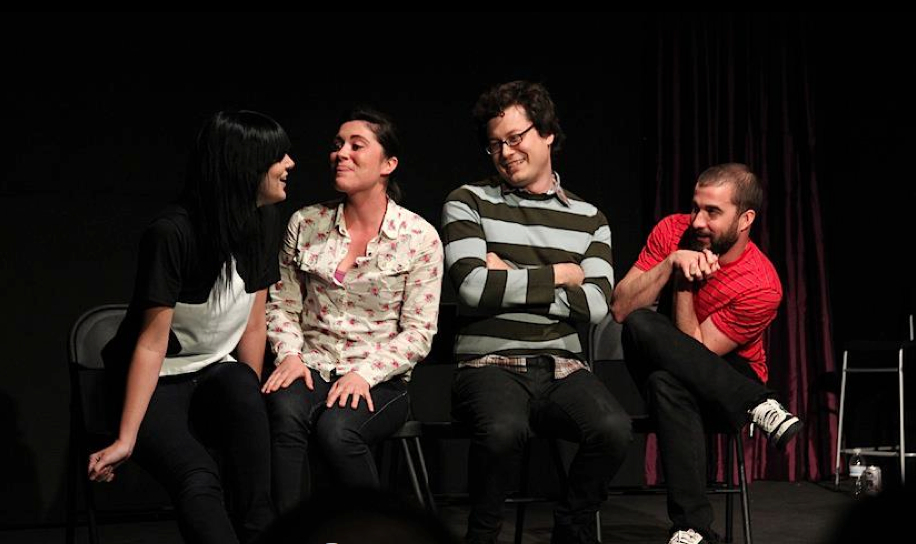