Derek Sivers demonstrates How To Start A Movement in a textbook example of supporting your scene partner.

“I truly believe you do more of what you’re already doing. If I sit around whining about why I don’t have a career, I won’t have one. If I’m writing or if I’m acting in an improv show in the down time, I will do more of that. Or if I have acted on a television show, I probably will in the future.” – Todd Stashwick

Laughter is contagious. According to research by professor of psychology, Robert Provine, you’re 30 times more likely to laugh when someone else is around than when you’re alone.

What better reason to turn off the TV and go see a live show?

The Art Of Comedy

People often argue about whether improvisation is art or comedy. Del Close believed the former, while Bernie Sahlins argued it was a tool to develop sketch comedy.

I think it’s both. And the more I learn about comedy, the more I realise the lines between art and comedy have been blurred for some time.

Cameron and I have always been drawn to art with ideas.

Whether it’s Michael Craig-Martin’s Oak Tree (a glass of water and a piece of paper that explains how the glass is, in fact, an oak tree), or Gillian Wearing’s Signs That Say What You Want Them To Say, and Not Signs That Say What Someone Else Wants You To Say, it’s amazing how many great ideas are also funny.

David Shrigley, Jason Polan, and Banksy use humour liberally in their work. And like improvisers, they often do it to make a social statement. It’s the contrast of light and dark, frivolity and foreboding that often makes art so powerful.

Other “serious” artists with a sense of humour include Damien Hirst, Janet Cardiff and George Bures Miller, Salvador Dali, and the venerable Gilbert & George.

And let’s not forget Andy Warhol. Anyone who films the Empire State Building with a locked-off camera for 24 hours and then shows the result in theatres is having a laugh.

When Canadian customs officers refused to let his Brillo boxes over the border because they looked like, well, Brillo boxes, and as such were subject to customs fees, Andy must’ve been pissing himself laughing back in New York.

Reporter: Does it bother you that you can’t hear what you sing during concerts?
John Lennon: No, we don’t mind. We’ve got the records at home.

The Beatles weren’t just talented musicians, they were incredibly witty. Listening to their fan club’s Christmas records, you’d swear they were a tight-knit improv team.

John appeared on Peter Cooke and Dudley Moore’s sketch comedy show Not Only, But Also. And George later teamed up with Monty Python in The Rutles: All You Need Is Cash. He also helped fund The Life of Brian.

Some musicians inject humour more directly into their work. Bands like Cake, They Might Be Giants, and Godley & Creme combine solid tunes with quirky lyrics. For a tour de force that’s part song, part sketch, check out Godley & Creme’s classic, The Party.

And while Flight of the Conchords are arguably comedians who just happen to sing and play guitar, their songs are undeniably catchy.

The Academy of Motion Picture Arts and Sciences has long favoured drama over comedy.

It’s a safe bet that Elizabeth Taylor wouldn’t have won the Best Actress Oscar® if Who’s Afraid Of Virginia Woolf? had been billed as a black comedy instead of a drama. It’s both, in my opinion.

As Judd Apatow pointed out, “It’s been like five times in a zillion years that [a comedy] has won Best Picture.” Maybe next year we’ll finally see a category for films like The Edge Of Tomorrow. (That’s a comedy, right?)

“That’s the great thing about advertising. You could have a crawl space under your kitchen floor filled with little girls’ bones and as long as you can dream up a better Chuck Wagon commercial, you’re in.” – from Dry by Augusten Burroughs

Some of my favourite authors are laugh-out-loud funny, even when their material is dark. A few of my best-loved books include:

by Harlan Ellison (television commentary with a hefty dose of vitriol)

Don’t Worry, He Won’t Get Far on Foot

by the late, great John Callahan (harrowing but hilarious autobiography of a hardcore alcoholic who becomes a cartoonist)

by Michael Ian Black (which includes A Series Of Letters To A Squirrel, and What I Would Be Thinking If I Were Billy Joel Driving To A Holiday Party Where I Knew There Was Going To Be A Piano)

“Art is anything you can get away with.” – Andy Warhol

What makes any art truly great is its ability to connect with the audience.

I did a show a couple of nights ago where I was a robot. Oh, I looked human, but I might as well have been C-3PO for all the emoting I was doing.

For whatever reason, when I got on stage, I played “from the neck up.” In other words, I talked a lot but there was no weight behind what I was saying.

I was looking for something clever to say, when the answer was in my heart, my gut, my body the whole time. The next time that happens, I hope to remember these few simple words: 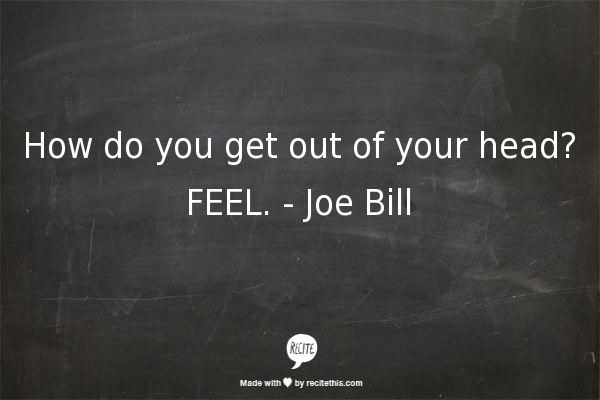 Get Me On Stage, I’m Scared

Lights up. Empty stage. 12 of you on the sidelines. You all know at least one of you has to move, RIGHT NOW, and fill that empty void.

Two people step forward. Heroes, right? They overcame the scariest thing you can do in improv and stepped out into nothingness.

Or so it seems. Because the fact is, the two that stepped out are not the bravest. They ran away from what’s truly the scariest thing in improv:

Being left on the sidelines.

“Look at those two out there, being in the moment, connecting with each other. What am I doing? I’m on the sidelines with nothing else to do but listen to the voices in my head. Think about why I didn’t step out first. Think about how to help this scene. Does this scene need help? Would I know? Should I edit? Should I have edited just there? Is it too late to edit now? It’s probably too late to edit. Why am I on this team? I’m probably the worst on this team. Maybe. Me and Chuck, bottom two for sure. Fuck, I should be listening to this scene. Okay, it’s not too late. Who are they to each other? That got a laugh. Not sure why. Delivery? Or callback? Focus! Oh good, someone edited. I should go out. What was that last scene about? I should bring a different energy. What was the word again? Oh good, someone’s out there. Why didn’t I go out?”

In the improv world, there’s nothing scarier than the voices in your head. So how do you avoid that?

One easy way is to go do a scene. Yep. I said easy. When you step out and do a scene, even a bad scene, you’re playing with someone else. You forget for a couple moments all the things you should be doing and you start doing them. If you step out and say, “Hey,” your next thought is probably What a stupid offer, but before you can dwell on that, your scene partner says “Hey” back. Now you have to say, “Sup?” and pretty quickly the scene takes focus over your thoughts.

On the sidelines, it’s just you and your thoughts.

So next time you’re too scared to go start a scene, don’t beat yourself up about it. You’re a hero to the rest of your team, ’cause that’s sure as hell not where they wanna be. Being on the sidelines is scary as fuck. 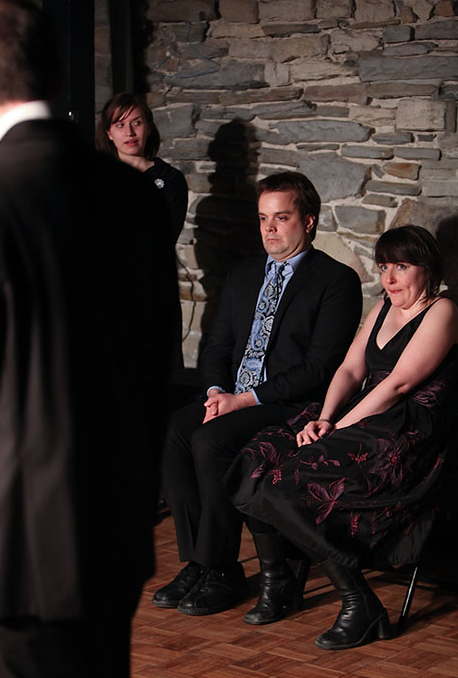