To Plot Or Not To Plot?

There are many different, passionate schools of thought on plot in improv. If you’re doing a narrative form like The Quest, or a musical format that requires you to hit certain plot points, it can lead to great shows. But for “regular” long form, it’s always been a stumbling block for me. So when this appeared in my newsfeed via David Razowsky, I had to share:

Hey, improvisers. I’m reading Stephen King’s On Writing, and he has a great paragraph on the need for plot. As many of you might remember, I’ve said “Fuck plot.” He, of course, said it in a more elegant way. (At the final sentence, please replace “writer” with “improviser.”):

“I distrust plot for two reasons: first, because our lives are largely plotless, even when you add in all our reasonable precautions and careful planning; and second, because I believe plotting and the spontaneity of real creation aren’t compatible. It’s best that I be as clear about this as I can –– I want you to understand that my basic belief about the making of stories is that they pretty much make themselves. The job of the writer is to give them a place to grow…”

Both as a writer and as an improviser, I couldn’t agree with this more. Here’s another favorite quote that applies to both:
“Remember: Plot is no more than footprints left in the snow after your characters have run by on their way to incredible destinations. Plot is observed after the fact rather than before. It cannot precede action. It is the chart that remains when an action is through. That is all Plot ever should be. It is human desire let run, running, and reaching a goal. It cannot be mechanical. It can only be dynamic. So, stand aside, forget targets, let the characters, your fingers, body, blood, and heart do.” – Ray Bradbury

When you think about the “Who” in improv, you might say “We’re father and son.” But there are a billion different father-and-son relationships. When we talk about defining the “Who,” it’s not “Keep re-establishing that you’re firemen.” It’s what’s going on between you. The “Who” isn’t just who you are; it’s who you are to each other. 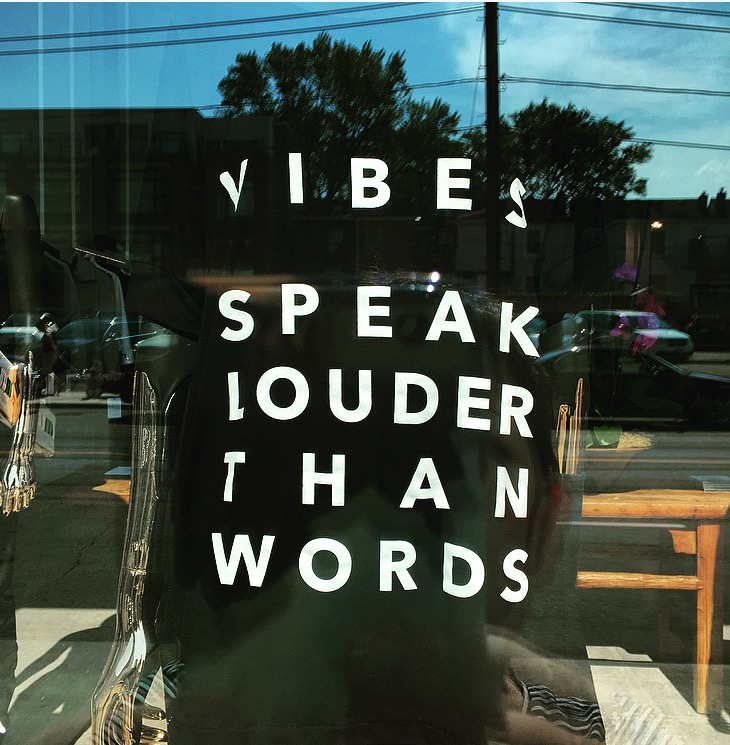 How many times have you felt an unmistakeable emotion from someone – sadness, fear, joy, rage – without a word being uttered? Vibrations are powerful. Before you open your mouth on stage, try listening with your whole body and tune in to the feeling that’s already there.

If you listen to Comedy Bang! Bang!, you know the Andy Daly characters get really fleshed-out, in part because Paul F. Tompkins, Jason Mantzoukas and Scott Aukerman ask leading questions.

You can do the same in scenes. When you ask leading questions, your scene partner now has to accept that reality and build out from there.

It’s like the press conference game. You’re basically endowing the character, and you just keep endowing them. For example:

Player #1: So, John, you wrote a book called Starting when you started drinking. I noticed the last chapters are just random type. Do you really feel like this has helped your life?

Then the person has to respond. It forces them to realise that those are true things now, because the other person said them. So it’s “yes-ing” and it’s “and-ing.” It’s forcing you to go, “Yes, this is fucking real, so just accept it.”

When Player #1 says, “Oh and there’s a whole chapter on how to start embezzling,” that feels like the wrong path, and you’d have to explain why, in your book, it’s a valuable thing to start doing.

Where it gets fun is, it’s really about surprising the other person. So like, “I notice you wear a live raccoon as a hat. Does that help with writing, or are you also into fashion?” And then they can be like, OK, I wear a live raccoon, how do I explain that? Or, “I see you’re not wearing pants.”

What you want is for them to almost laugh the word “Yep,” and then follow up with “Here’s why, and here’s how that happened…”

Player #2: Yes. The man and the moustache.

Player #1: For your birthday gift, on twitter you said that you wanted people to send you their used Kleenex. For eating. Was that a joke, or do you actually eat tissues?

Player #2: I do. I feel like the fibre market is expanding…

Player #2: Well, people are germophobes now. Everyone’s carrying around their little bottle of Purell, and it’s actually leading to a very unhealthy and more dangerous society. We need to get more germs into our bodies in order to be healthier.

To get started, you might endow someone’s character, but then as they “yes, and” it, they’re going to say things that in turn you can feast on.

So if you say you’re into Paleo, I’ll think, to what extreme are you like a caveman? You know what, I’ll test this out by saying, “I notice you slaughtered the neighbours’ dog and ate it, and you also drag your wife around by the hair.” I’m not making you say those things; you said you were big on the Paleo thing, now let’s really go 100% on it.

Try it at your next rehearsal.

Where’s Your Head At? 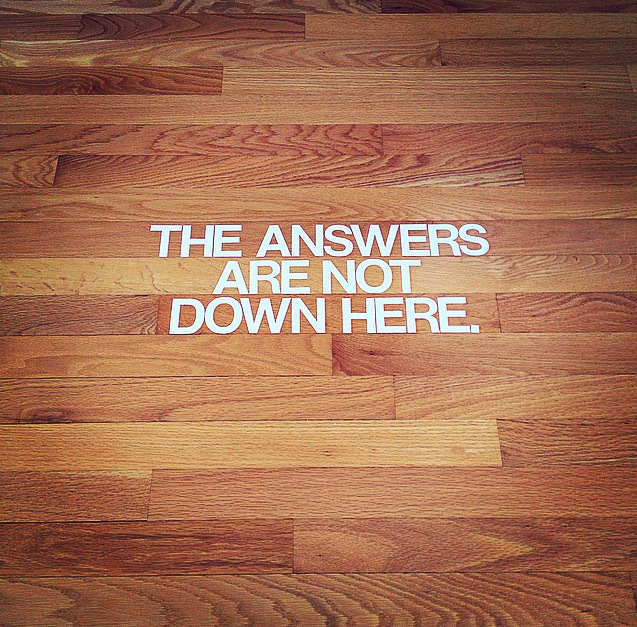 When you’re staring at the floor you’re not improvising, you’re inventing.

Look up. Everything you’re searching for is in the eyes of your scene partner.

“Ideally, you don’t speak until you have something honest to say.” – TJ Jagodowski

Sometimes in improv, we try to force a storyline so that it follows the rules of “the real world.” And while grounded scenes can be very entertaining, there’s something to be said for great acting married with crazy circumstances.

Case in point: The Avalanches’ Frontier Psychiatrist. The characters and their surroundings may look nutty, but their performances are very natural. Which makes the complete package weird as shit…and utterly wonderful.

The National Theatre of The World did a long scene recently where Matt Baram and Ron Pederson never referred to each other by name.

Naomi Snieckus then mischievously pimped them, herself and Chris Gibbs into doing a scene that only contained names.

The result was hilarious but also fascinating, as they used only first names (e.g. “Edgar?” “Daphne…” “Timothy!”) to emote and define their relationships to each other.

It’s a fun alternative to the “Fifty” exercise, where two people do a scene using only numbers from 1 to 50 in place of dialogue.

Try it at your next rehearsal! 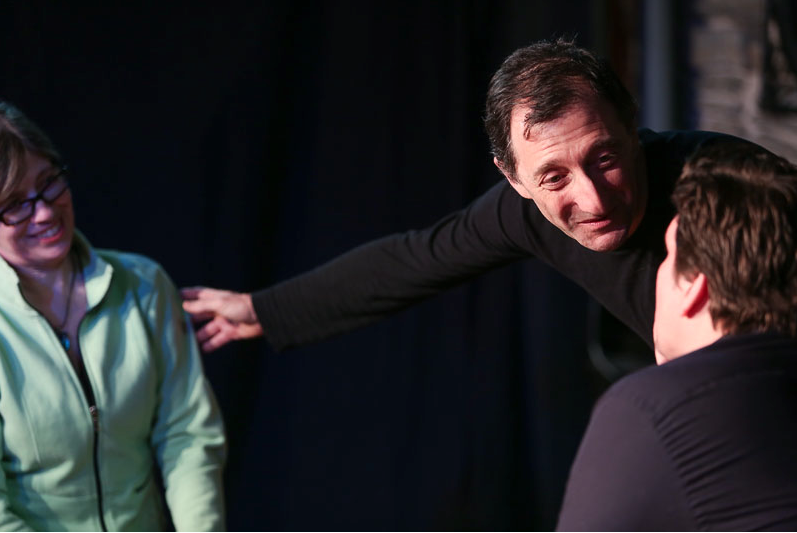 3. You have a surprisingly strong opinion about what your partner is doing.

4. If you really don’t want to do something, do it.

5. Yes, you should have edited there.

7. No house painter has ever had an amazing new house painting technique. 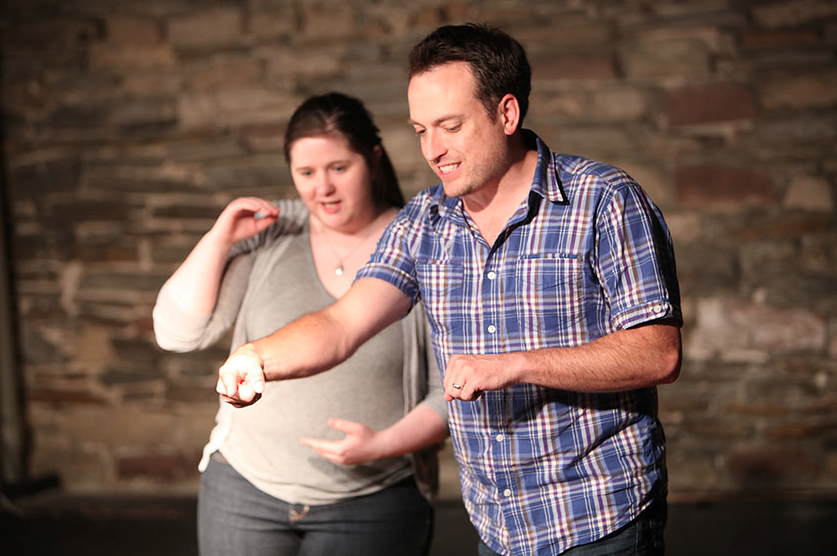 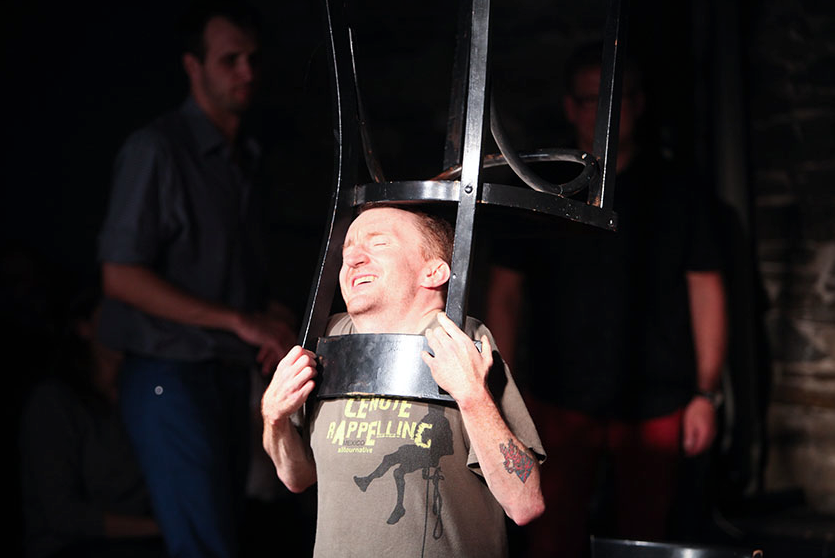 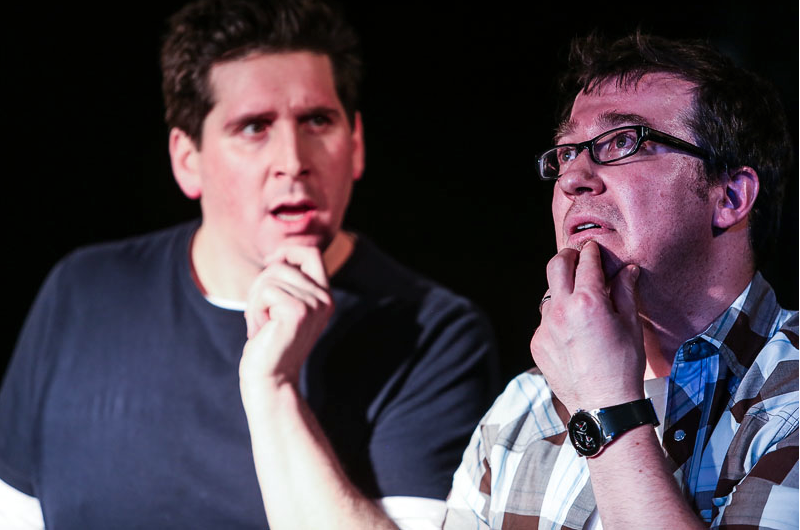 Doug Sheppard is a Web developer by trade, and a writer and improviser by vocation. He lives in Toronto and considers it one of the finest places in all of Canada. You may also be amused by his twitter.