A friend shared this recently, with the plea, “Dear Comedians, Don’t do this. Dear Marketers, Pay your talent.” 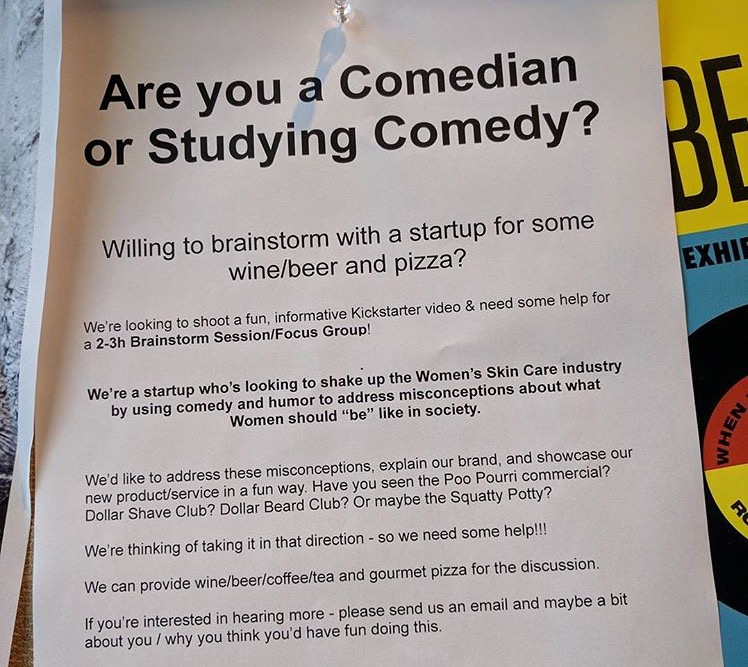 Now, maybe you’re thinking, “What’s the big deal? It’s a couple hours of my time in return for a Domino’s Deluxe and some sweet, sweet Pabst Blue Ribbon.”

To advertisers, you’re just naturally funny people, and if you’re going to have funny ideas anyway, send them their way and they’ll actually make them happen.

Students pay around $300 in Canada, and $400-$475 in the US for classes. And as every comedy student knows, there’s a lot of classes. Acting, improv, stand-up, sketch, clown…it’s a field where you never stop learning.

It’s not that you can’t do favours. It’s just that you might be forgetting you’ve earned the right to ask for money. You went to school for what you do. You put in the time and money and now you can reap the rewards. Not just have others reap the rewards.

And by rewards I mean that sweet, sweet $35,000 a year the average comedian makes (with many earning far less). No wonder we’re willing to work for food.

In this age of Fivvr and crowdsourcing and Kickstarter potato salad, the line between an investment in your career and being taken advantage of can get blurry.

But stay strong, young Grasshopper. Because the real lesson here, buried in that ad, is Dollar Shave Club.

Two weeks ago, Unilever bought the company for $1 Billion.

The commercial that made DSC famous (23 million views and counting) wasn’t created by an ad agency. It was the brainchild of CEO, Michael Dubin.

Dubin studied and performed comedy for eight years at UCBT. He made the video, which he wrote and stars in, for just $4,500.

Michael Jones was an early investor. In a piece for CNBC, he said he wasn’t totally sold on Dubin’s business pitch. What convinced him was a rough cut of the video. After viewing it, he said, “I knew that Science Inc. needed to come on board…”

Research shows people rarely make rational purchases; they make emotional ones. Simply put, we buy brands we like. Dubin’s idea for a shaving company was worth something. But his comedic idea was worth billions. The value of Dollar Shave Club was made clear in that creative expression.

Sure, he could’ve given it away for some pizza and free razors. He’s a funny guy with plenty more ideas. But he didn’t. And now he never has to.

Because now more than ever, ideas are our greatest currency.

*We initially quoted $30K as the average comedian salary. A Workopolis survey pegs the average wage for arts, entertainment and recreation at $30,186. Stats Canada reports an average of $40,300 for actors, comedians and drama teachers combined. (That figure seems high – to us and people we’ve spoken with – given that many seasoned performers live with roommates and scrape by working as film extras, servers, baristas, or real estate agents to supplement their comedy pay. Also, some stats are for Quebec; francophones book bilingual, as well as French-only acting roles, far more often than bilingual anglophones.) Still, according to StatsCan, one third earn $10,000 annually or less.