Chris and Laura are staples of the comedy community. Chris shot and directed How To Spot An Improviser, and Laura is one half of hilarious sketch duo, Two Weird Ladies, among many other things. We got all real talk on their relationship. 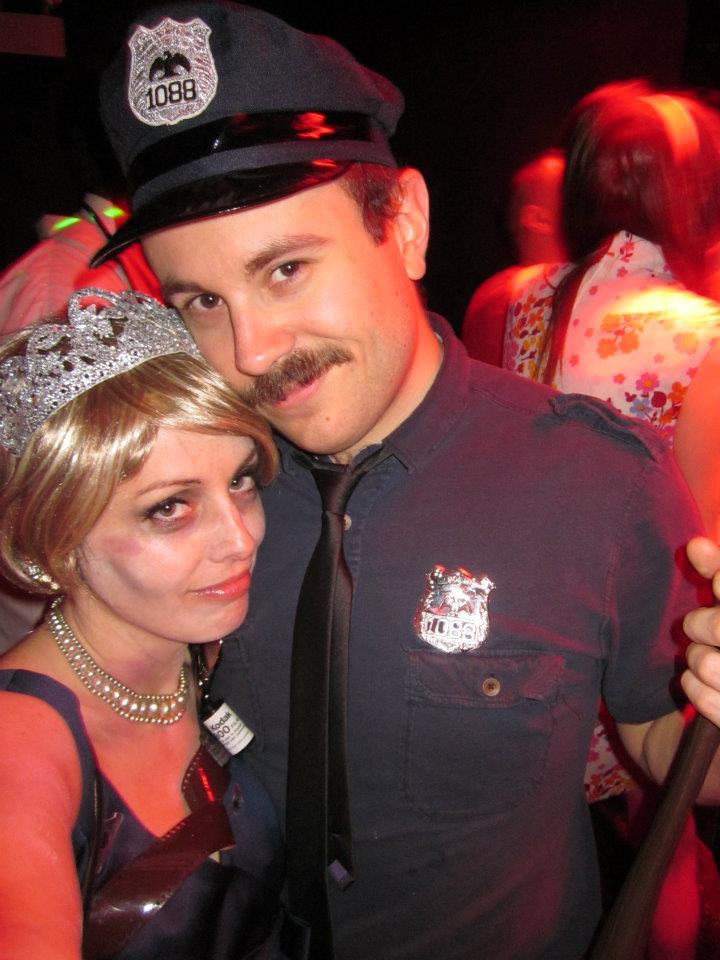 P&C: How and when did you meet?

Chris: Laura claims it was at a party of a mutual friend. I have no recollection of this.

Laura: That’s because it was 2:30 am on New Year’s Day and Chris was drunk. Though it’s good to know I failed to make any sort of lasting impression.

The first time I noticed Chris was at a Vanguard improv show at The Supermarket. I thought he was really funny so I tucked his existence away in my mind. Then I tried to talk to him at the party he doesn’t remember. To be fair, the conversation was very boring.

Laura: We hung out at DCM in 2010 and again in 2011, but the first time we really got to know each other was during the 2011 Toronto Improv Festival. We’d both gone to see shows alone, and although we knew lots of people at Comedy Bar, we were both pretty socially awkward and ended up just talking to each other all night.

A week later we were back at Comedy Bar for Halloween. I was dressed as Zombie Princess Di and Chris was dressed as some comic book character called Axe Cop that I’d never heard of in my life. Despite my tasteless costume and abundant zombie makeup, we got drunk and made out. Yadda, yadda, yadda – we’re getting married in November. I’ll really have to work on this story before we have kids. So they respect us and stuff.

Chris: They can respect Laura all they want. I’m planning on being the embarrassing dad.

P&C: When did you first know you liked the other person?

Chris: I stage-liked Laura when I saw the remount of her Second City Conservatory show, Citizen Vain. I thought she was hilarious.

I started to like-like her at the Del Close Marathon in 2011. (Notice a trend?) Four of us were discussing Seinfeld, and which characters we were most like. She was Elaine, and I was George. I was a little distraught, as only in Jason Alexander’s fan fiction would Elaine ever fall for George. Luckily over the course of the festival we got to get to know each other more.

I wouldn’t make a move until months later when I ran into her at Comedy Bar. After a long discussion I came up with the brilliant flirting line, “I don’t want to date comedians.” Somehow we got together. (Booze.)

Laura: I found Chris appealing from the moment I saw him on stage as part of his Vanguard show. Mostly because he was funny and I really liked the way he improvised. But also he was attractive and was dressed in a weird skater/slacker/I-do-improv-and-have-no-money style that I particularly liked.

But I felt we really hit it off at DCM. Finding out Chris loves Seinfeld and relates most to George Costanza was sadly a big plus for me, as I am somewhat of a female Larry David.

Chris was just as excited as I was to spend hours in FAO Schwartz looking at toys, and together we came up with the plot to a sequel to the movie Big, called Little, starring Colin Hanks. A love for Seinfeld, affinity for Lego, and abnormally detailed knowledge of a 1980s Tom Hanks classic. What was not to like? 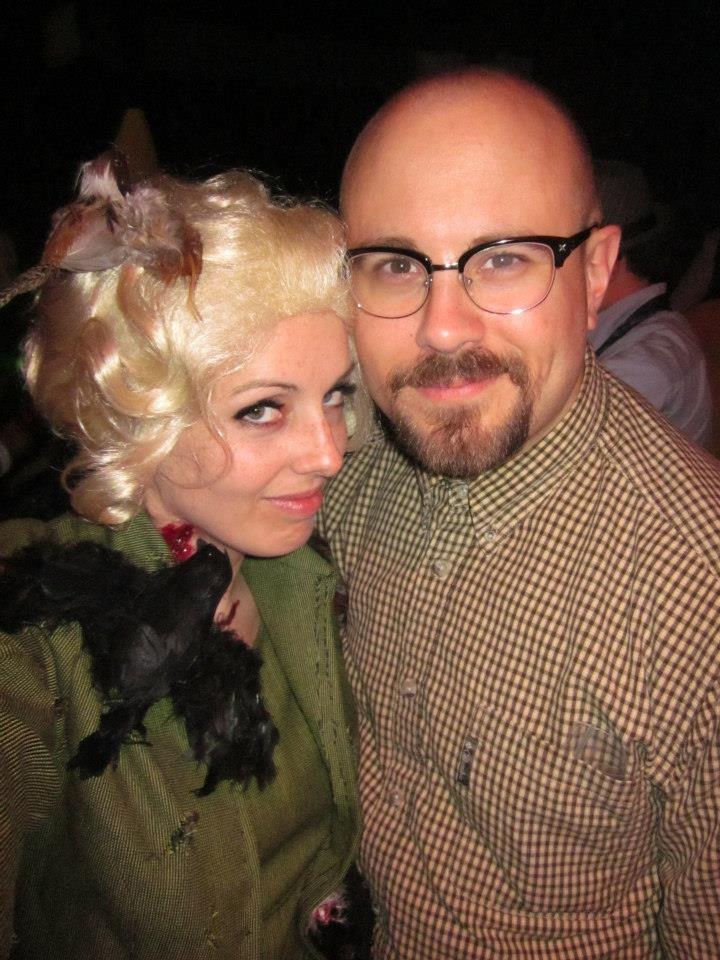 P&C: Have you ever performed together?

Chris: We were never on the same improv team, but we did write and perform in a sketch revue together. We’re both Type A (okay, I’m more of an A minus) so we got stuff done. She is a crazy talented comedy writer, so she brought out the best in me.

Laura: We were both part of a short-run improv show where we improvised episodes of Degrassi Junior High. Man – we really need to bring that show back. It was so much fun. I played pregnant Spike and Chris played Mr. Raditch.

Other than that, we’ve done a few one-off shows together, co-wrote a news joke podcast, and worked together writing and acting in an anti-Ford municipal election sketch show.

It’s great working with someone who shares your crazy work ethic and obsession with detail (even if it’s maybe because they’re a little scared of how Type A you are). I remember I initially said I didn’t want to be that couple who does improv together. Now I actually want to start an improv duo with Chris called “That Couple Who.” I should remember to ask him about that…

Chris: Laura, remember to ask me about that.

P&C: What’s the best, worst, or funniest moment you’ve had improvising together?

Chris: In a workshop we were given the task of improvising as each other on a date. For some couples this could be an effective means to truncate a relationship. We certainly fell into the trap of pointing out each other’s flaws: she talked about superheroes and checked her phone a lot, while I took the entire scene to decide what to order. I also made note to correct the grammar of the menu.

While the people watching thought they were seeing a couple air their grievances, we were, in a way, retelling the night where I realized I loved her. I’d come back from the washroom at Fran’s Restaurant to find Laura correcting their menu with a green pen. They had a fascination with unnecessary apostrophes. It was at that moment I knew it was love. (I’m fairly certain she thought I would bail immediately.)

Laura: Not improv, but the worst for me was the one time Chris saw me do stand-up. I used to be a pretty decent stand-up, but I didn’t love it the way I love sketch and improv so I retired. A couple years later, after I started dating Chris, on a whim I did stand-up once, using new material I’d written the night before. Untested material, mostly about travelling to a crowd who either had never travelled or thought I wasn’t funny.

So the only time Chris saw me do stand-up I really fell flat. It haunts me. It’s like skipping Wayne’s World and Austin Powers and going straight to The Love Guru; you’re never going to believe that Mike Myers was once funny.

P&C: How has improv helped your relationship?

Chris: We’re in the final stages of planning our wedding. We have to keep reminding each other that we can’t just choose the funniest thing, that our wedding should also be sentimental.

Since then, I’ve realized how important it is to have someone who understands the desire to dedicate your time doing something you love for free. We both understand when the other person has stretches of time when they’re never home, we both understand the importance of going to each other’s shows and supporting each other, we both understand that there’s no “end goal” in doing improv – we both plan and hope to do it for as long as we are able.

People who aren’t passionate about an art form, playing a sport, etc, often don’t understand these things. Plus, our relationship has been fun.

P&C: What impact has improv had on your careers?

Chris: I was in a toxic seven-year relationship with a nation-wide book chain. In my interview with my current employer, my boss doubted my ability to take rejection well. I’d be doing sales if I got the job, and it’s not a job for everyone. I told him, “I auditioned for Second City Conservatory for five years until I got in, I think I can handle rejection.” He replied, “You’re hired.”

Laura: If we’re talking about my day job, not going to lie – improv has probably mostly hurt my career. While it has helped my people skills to a certain degree, it also means I say things without thinking and can be an unprofessional piece of trash who sometimes crosses the line without meaning to.

Recently before entering a meeting with a high-level exec, my boss had to pull me aside and warn me not to do anything dumb. Essentially all I can do is be myself and hope the people who matter like my sense of humour. And of course being involved in the arts makes it hard to sit at a desk being all non-creative and stuff. Improv is about creating, exploring new ideas and being innovative, but sometimes the corporate world is not open to change and just wants to go by the book, which I find challenging.

Outside of the office, improv has helped me immensely in auditions and other forms of comedy. Recently during my solo play, the power went out halfway through the show. Alone on stage in the dark, I’ve never been more grateful for my improv skills.

That said, making $40 on a play you spend hundreds of hours writing, producing and acting in hardly counts as a career. During the day I sit at a desk reading legal contracts and writing professionally-worded emails, then trying not to say anything that will get me fired when I’m in meetings with VPs. But I am slowly taking the steps I need to to become a writer for television, and once that dream comes true my improv skills will help me immensely. 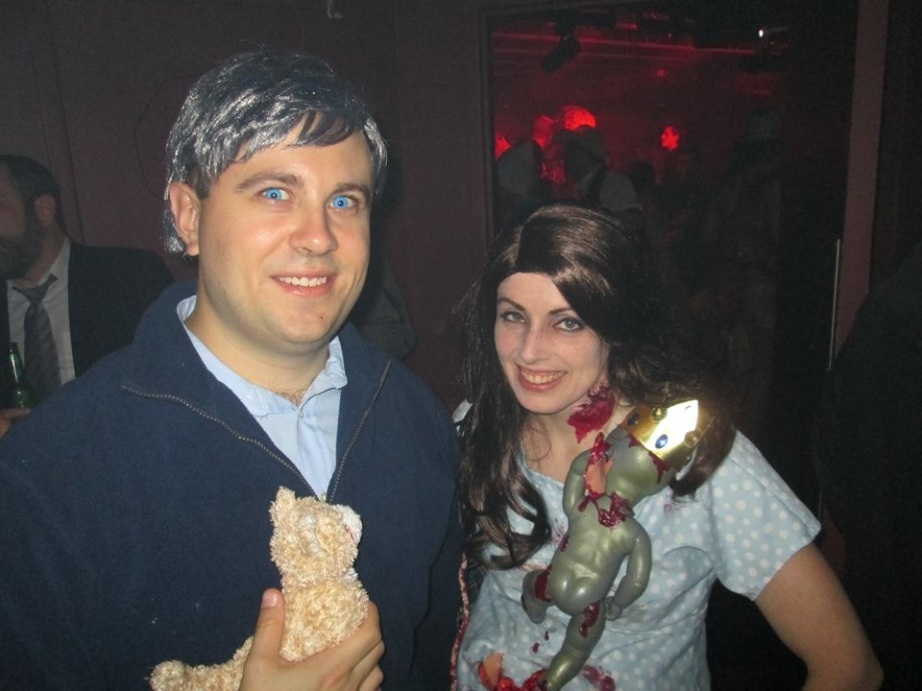 (Chris wins for scariest costume as Stephen Harper. And did we mention the Comedy Bar Halloween show is right around the corner?)