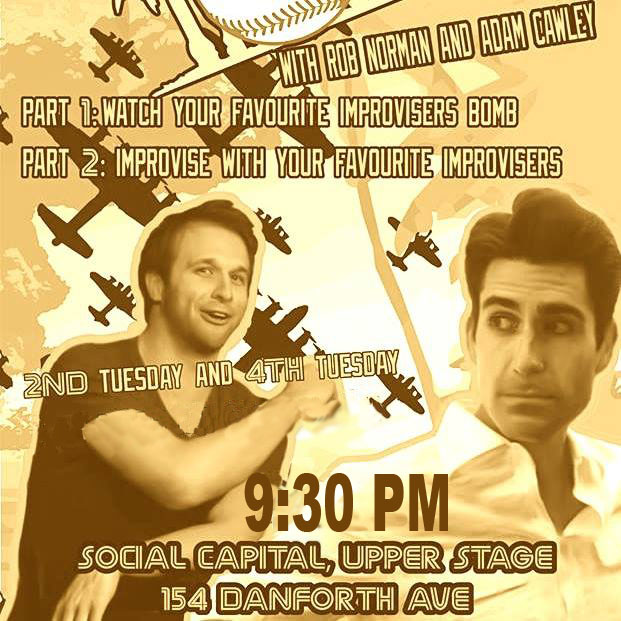 It’s been 10 years since I performed for the first time at Second City Training Centre. I was on stage for all of three minutes, dry-mouthed and sweaty-palmed while I tried to remember what comes after “B” in the Alphabet Game.

Since then I’ve had various anxious moments, but rarely does my adrenaline spike like it did in that first year of improvising. Which is why I was intrigued (and terrified) by the notion of Bombbaes. I asked the show’s co-creator, Rob Norman, to explain.

RN: Bombbaes is designed for good improvisers to do something that they’re not good at: either stand-up, solo sketch, clown, a character piece, magic tricks… It really could be anything. You could write something and read it out loud.

P&C: What made you decide to start doing it?

RN: It comes from the idea of, improv is based on risk and danger, and if we’re not doing something that’s risky and dangerous then we shouldn’t be improvising. Every time we step into a scene there should be some kind of risk. And so for me and Adam, the other co-creator, co-producer, we were feeling very comfortable in improv, and so we wanted to do stuff that made us feel very uncomfortable.

[An improviser] came up to me the other day and said, “Hi, I know you’re Rob and Adam, I just don’t know which one you are.” I said, “I’m Rob.” Every time we see her she’s like, “You’re either the Rob or Adam, I don’t remember.” And so there’s this kind of pairing that happens in people’s minds, which is awesome, but I think as you get a little older too you wanna be able to say, “This is me, this is my voice, this what I do.”

And so the big push for me in Bombbaes has been developing some kind of stand-up act. I didn’t feel comfortable doing it in the stand-up community, just because of the way I’m wired and the way the stand-up community is. It’s a very harsh place and you have to have a very thick skin, and I do not have one, so Bombbaes is a good place for me to get good and figure things out in front of other improvisers who are going to support me before I get good enough to go out into the real world and suffer criticism.

RN: I just did my first stand-up show with a regular audience at Mullet’s Night Show on Thursday, and it was so weird for me.

Before I was always doing shows where people in the audience knew who I was; maybe might even be excited about [seeing] me as an improviser. So when I was doing stand-up, there was a little bit of protection I guess, because people knew who I was. So when I made a joke that tested some boundaries people were like, “Oh man, I know who Rob is, he’s pushing boundaries but I trust where he’s going.”

At [Mullet’s] I did five jokes and three of them were great, but two of them… This one woman in the audience called out and repeated back premises to me: “Where are you going with this?” “What are you saying?” “Are you a monster?!” And I was like, “No, no, wait for the punchline please!” So that was like a whole other world for me. I was out of my safety zone; no one knows who I am, nobody cares what I do, and so I’m kind of back to basics.

P&C: For anyone interested in taking part, Bombbaes is a solo show?

RN: Because improvisers work so well in ensembles and duos, the thing that most people are most excited about doing or trying is solo pieces. So there’s no rule about doing more-than-one-person stuff, but I think we’ve only ever had one person do a duo. Everyone else has done solo pieces.

P&C: And what’s the coolest or most memorable act you’ve seen?

RN: The best, weirdest thing I’ve ever seen at Bombbaes is a woman who was an owl for seven minutes.

RN: There was no comedic element to it. She’d taken a clown class and wanted to experiment with something, so she was just an owl and she just interacted with the audience.

P&C: Awesome. Well, I guess now I’ll have to find the courage to try something.

Be sure to check out Rob and Adam’s improv podcast, The Backline, and Rob’s book, Improvising Now: A Practical Guide to Modern Improvisation.

Podcast: The Backline With Rob And Adam

There’s an old joke that analyzing humour is like dissecting a frog: few people are interested and the frog dies of it. But for students of improv (and we’re all students, really), there’s nothing more fascinating than discussing this art form we all love.

The Backline with Rob Norman and Adam Cawley is part class room, part personal POV, and part witty banter-slash-sparring match. Like Lennon and McCartney, Rob and Adam perform brilliantly together, but they also spur each other on to greater heights. (Adam just won Best Male Improviser at the Canadian Comedy Awards, while Rob is currently shooting a new TV show. Check, and mate.)

Both are long-time fixtures of the Toronto improv scene, Second City alumni and long-form instructors at the Second City Training Centre. They’re also working actors who’ve studied with some of the greats (Napier, Messing, Cackowski, Joe Bill, to name a few) and have performed in festivals across North America. In other words, they know their shit.

Though it’s only been around for a few months, The Backline has already covered a wide range of topics, and each episode is filled with anecdotes and great advice. Themes include Getting Started, Fear, Competition, Ethics, and Cities, History and Comedy Scenes.

Whether you’re a newb or a seasoned vet, The Backline should be on your playlist. Click here to join their Facebook group, or subscribe for free here. 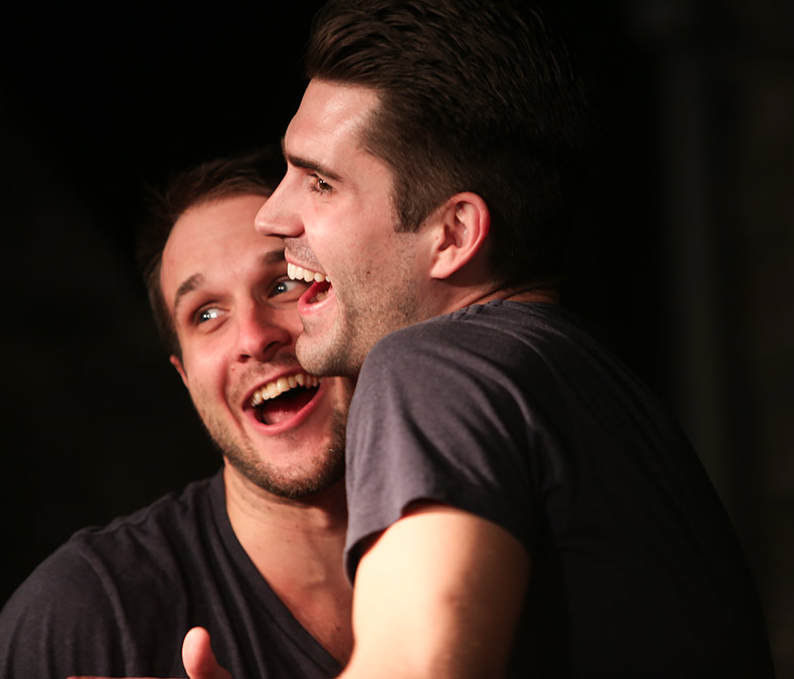