The Year Of Improvising Dangerously

After eight years of doing improv, I’m finally comfortable on stage. Sometimes I still get butterflies before shows, but gone are the sweaty palms, the dizziness in the green room, the sudden urge to stay in the bathroom all night.

For a long time, just the act of getting on stage felt risky. Now I feel it’s time to push myself further.

This year, I want to do things I’ve never done, done only once, or never thought I could do. Things like…

TJ and Dave regularly incorporate ghosting in their sets. So does Toronto’s El Fantoma.

Both are masters at creating clearly defined characters whose posture, timbre, and gestures are easily identifiable. That’s important, not just for the performers, but so the audience knows what’s happening as well.

Most venues have a microphone on hand, and savvy tech guys like Comedy Bar’s Mark Andrada will turn it on if they see an improviser wants to use it.

I’ve seen mics used (generally offstage) for the Voice of God, an airplane captain, a lounge lizard, and sound effects like wind, rain, a train, a gong, and beatboxing.

It looks like fun, but for some reason I’ve never dared try it. This year I will dare.

Interacting Directly With The Audience

I’ve done this once, maybe twice with my team, and never on my own. The idea of going into the crowd and mingling or talking with someone terrifies me as much as it probably does them. Which is why I have to do it.

Occasionally someone will exit the stage and never return (well, not for the rest of the set anyway). It always seems like a gutsy move, but somehow I felt if I tried it, I’d be abandoning my team.

When I think about it though, the people I’ve seen do it weren’t screwing over their scene partners. If the opportunity presents itself and it doesn’t feel forced, I’m gonna go for it.

Performing Behind The Curtain

For some reason, playing behind the curtain while staying in the scene scares the bejeezus out of me. Whenever I see people do it I think, “How do they know what’s going on? Can they really hear back there? What if the scene gets swept and they don’t know?”

Some people go one further and do their scene from the green room. This terrifies me even more, so I guess I’ve gotta try it at some point.

Making Bold Choices…And Sticking With Them

David Pasquesi sometimes plays with his back to the audience.

Anand Rajaram once stood motionless for a whole scene while saliva slowly dripped from his mouth to the floor.

Alex Tindal regularly hoists himself up to the rafters, and he’s even been known to get naked on stage.

While I’m not quite ready to get naked, I am ready to make changes. For years, I’ve struggled with “adaptive improviser” syndrome, where I come in with a strong character and then drop it when I think my scene partner’s offer is so much better.

This year I want to make brave choices and stick to them.

When S&P performed in Chicago a few years ago, Isaac Kessler played a character who died while seated. As his character stood up and slowly moved towards the light, Cameron came in behind him and slumped in the chair.

It was beautiful to watch. Not funny, but inspiring.

He told me after that he wondered for a split second if the team would know he was Isaac’s body, and not a new character, but he quickly dismissed the thought and made the move.

This year I want to make moves like that. I want to stop playing safe.

A friend on TourCo very kindly invited us to do the improv set after the show. As I feel my comfort with being on stage suddenly dissolve in a wave of nausea and sweaty palms, I’m contenting myself with the fact that I can always do it from the green room.

“The job is not to succeed, but fail more interesting than the last time – in a more subtle fashion or in a more intriguing way.” – TJ Jagodowski 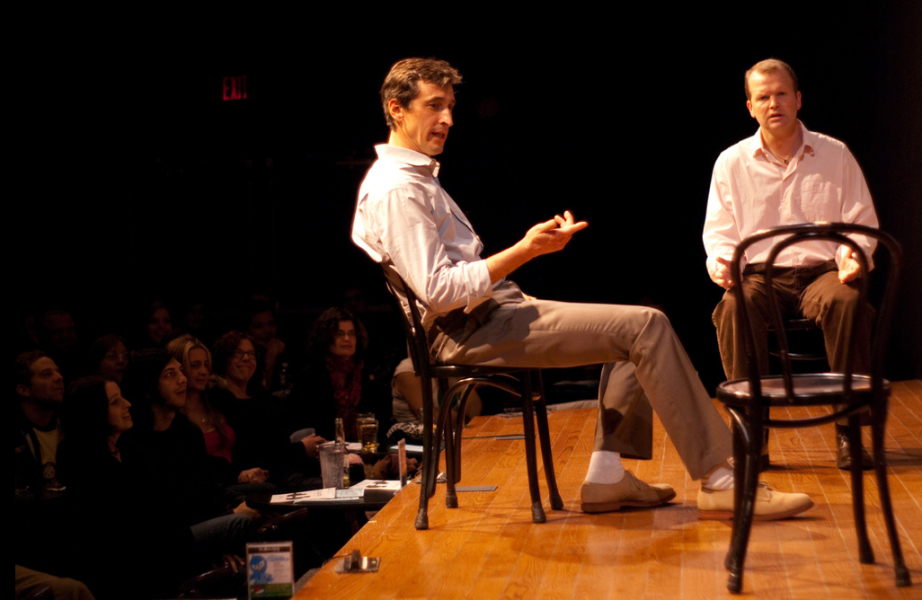