Here’s a bounty of goodies any improviser (maybe you?) would love to open on Festivus morning. First up…

A Load Of Hooey

Bob Odenkirk’s new book is just the thing to get you through post-Breaking Bad, pre-Better Call Saul doldrums.

, A Load of Hooey

is a pastiche of bits and pieces from one of comedy’s most ingenious minds. As the description says, “Odenkirk’s debut resembles nothing so much as a hilarious new sketch comedy show that’s exclusively available as a streaming video for your mind.”

If you want to up your long form game, look no further than Improvising Now

. Rob Norman’s book is as entertaining as it is educational, and at 150 pages, it’s the perfect stocking stuffer. (If you have stretchy, rectangular stockings.) 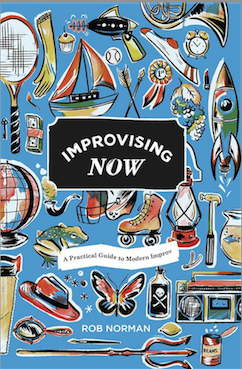 helps ease the pain. Crammed with memorable moments and “who knew?” insights, this meticulously researched volume is a worthy addition to any Colbert fan’s shrine.

Vape to your heart’s content this holiday season with the sexy new Pax Vaporizer. At 300 bucks it ain’t exactly cheap, but it’s amazing how many impoverished improvisers swear by it.

Now you can be in the moment, every moment, with our very own improviser’s clock. Click here or below to shop the full range of designs. And be sure to check out our store for cool shirt designs by Rob Ariss Hills.

Your favourite improv nerd already owns the Game of Thrones box set, a sonic screwdriver, and every volume of Axe Cop.

Fresh out of ideas? Well relax. There are still a few goodies we guarantee they’d be happy to find in their stocking.

Experiential gifts are some of the coolest things you can give. So why not share the joy of clapping along to Big Booty with a bunch of strangers?

Like a lot of people, we fell in love with improv at Second City Training Centre. From Level A for beginners, to writing, acting, and specialty classes, you can give a gift certificate for any of SCTC’s awesome courses. Click here for info on Chicago, LA and Toronto.

If your friend lives in Chicago, a gift certificate for any of Jimmy Carrane’s Art of Slow Comedy classes is just the ticket.

Authors Besser, Roberts and Walsh have poured 20+ years of knowledge into this mutha of all improv books. Coming in at just under 400 pages, it covers everything from two-person scenes to Harold structure, and was designed for beginners as well as seasoned improvisers.

Improvise. Scene from the Inside Out

We’ve said it before: no one writes more engagingly about improv than Mick Napier. Like UCB’s manual, Improvise

appeals to both novice and seasoned performers. And at 144 pages, it’s the perfect companion for those improv festival road trips.

Trust Us, This Is All Made Up

If you’ve ever seen TJ and Dave perform, you know you’ve witnessed something profoundly unique and brilliant in the world of improv.

Watching them play is like a master class in itself. Which is why every improviser should own a copy of Trust Us, This Is All Made Up, a documentary of the duo performing live at the Barrow Street Theatre. We’ve probably seen it a dozen times, and still learn something with each viewing.

True, it’s not improv. But Mr Show With Bob & David

redefined comedy for a generation.

Younger audiences may recognize Bob Odenkirk from Breaking Bad, or David Cross from Arrested Development. But between 1995 and ’98, the two of them created one of the most subversive sketch shows ever imagined. Multiple viewings are a must, due to the insane amount of creativity jammed into each episode.

Without Larry Sanders, there would be no Office. No Alan Partridge. Even, some suggest, no Deadwood or Oz. In fact, it’s impossible to conceive of a world TLSS didn’t influence.

Long before reality TV, The Larry Sanders Show was a groundbreaking satire combining social commentary and “faux reality,” with a cast so talented it boggles the mind. Garry Shandling, Jeffrey Tambor, Rip Torn, Janeane Garofalo, Bob Odenkirk, Wallace Langham and Sean Thompson shared the screen with some of the greatest actors and musicians on the planet.

The box set contains all 89 episodes, plus commentaries and a feature-length documentary. Give it to really someone special…if you can bear to part with it.