Dare To Be Different

Cameron and I saw True Blue at the Fringe festival, and five days later, it’s stayed with me.

The show is an hour of unscripted theatre in the style of NYPD Blue or True Detective. The pace is slower than most improvised sets, but it’s every bit as compelling. Unlike most improv, the actors weren’t going for laughs (although there were plenty to keep us entertained). But what was really refreshing was seeing improvisers sit in scenes long enough for nuances to emerge, and dialogue to breathe.

One of my favourite performances was by Shanda Bezic, an actor who I was surprised to discover only started learning improv last year. Her characters were grounded and authentic, yet still playful.

At the other end of the scale was Anders Yates’ hilarious turn as a coroner. It was clear he didn’t know much about coroner…ing, but scene partners Colin Munch and Amy Matysio used this gift to their advantage, and the audience’s delight.

I came away thinking how we don’t have to know everything, or be “expert improvisers,” as long as we commit fully to each tiny moment, and each other, on stage. And how being different – in format, style, or approach – is a wonderful thing.

True Blue was named Patron’s Pick, and there are still two more chances to see it this Sunday.

It’s no secret there are a lot of sci-fi and fantasy nerds – uh, fans – in the comedy community. But you don’t have to be a diehard Thronie to enjoy the improvised parody, Throne of Games.

We asked Director Colin Munch and fellow cast member Kris Siddiqi about their world of the Seven Kingdoms.

P&C: What were some of the challenges in adapting a series as popular – and mammoth – as Game of Thrones for the stage?

KS: Getting people up to speed on a really thick, huge universe. And just being able to sort of skim the top of that, get that basic information out that needs to be gotten out, and still be able to translate the intentions of the character, and their placement in the world.

CM: [It was] probably equally challenging for those who didn’t know the world, as it was for those who do. Because you have to choose between being a know-it-all nerd and actually making choices that are playable, rather than just dumping knowledge.

KS: Totally. I think as improvisers, we always play in genres no matter what. If it’s there, we’re playing in the genre.

But that’s what makes these challenges easier to work with, because we’re all well versed in the tropes and the idiosyncrasies of the genre. And something like this is steeped in every single trope and idiom that a fantasy genre comes in.

CM: Yeah, it’s not just a mediaeval fantasy. It’s a murder mystery, it’s a family drama, it’s a horror story at times. It covers all the bases.

P&C: The cast reads like a Who’s Who of Canadian comedy greats. How did you choose people for each role?

CM: Well, we wanted [Kris] for Ned immediately. It was definitely a bonus that you were already a fan and were available. But you were the first name that was put forward for the cast.

I really wanted [Conor] Bradbury for Khal Drogo right away. I knew I could put him in jean shorts and he wouldn’t argue with me.

KS: Did you choose more on just on physical appearance or…?

CM: Well Paloma [Nunez] and Alice [Moran] did most of the casting, because they’re more familiar with who’s who in the community.

I was really focused on temperament and attitude rather than what they looked like. Rob Norman doesn’t look like a 14-year-old boy, but he plays Joffrey really, really well.

P&C: It’s rare to see costumes used in improv, let alone ones as elaborate as yours.

Does performing in costume help or hinder players?

CM: Absolutely. The one challenge it creates is it, in a way, can lock our actors into playing a single character. Which can be detrimental to the show as a whole.

Paloma can’t just toss off her dress and jump on and play another character; she pretty much has to be Cersei for the whole show. Whereas I as Viserys could probably just toss off my wig and come in as something else if I needed to.

KS: But I think really that’s the only difference. Because again it’s being improvisers and being used to like, “Oh, where’s a joke I can drop?” or “How can I help this scene?” We’re not as able to do that in this, again, because those costumes clearly define who you are.

CM: And it lets us act a little bit more than we usually get to. You get to sit in your character more; you don’t usually get that luxury when you’re just guys in t-shirts and jeans.

KS: When you have that pomp, it totally adds to it. Me and [James] Gangl did a show years ago based on Deadwood…

KS: We had a friend who worked at a costume store, and she did the fittings for everyone. And there was the day when everyone saw themselves in costume… The room was kinda silent, because everyone’s gears were turning in their head: “Oh, look at me, look at me!”

And then there was a silent thing amongst the guys in the cast where they all started growing mustaches and muttonchops.

CM: It’s amazing the beards that have sprung up in the TOG rehearsal process. Etan [Muskat]’s got a beard. Ken Hall’s been growing that beard for like, six months.

Also, I love how crappy Nug [Nahrgang]’s costume is. We just throw a cape and crown over whatever Nug shows up wearing.

His character is so in contrast to the rest of the players in the show. He’s this super contemporary, 21st century party animal. I haven’t seen him yet, but he’s ordered Stark and Baratheon jerseys for everyone.

KS: That’s what I like; where I’m taking it so seriously and he…not that he’s not, but he’s not, you know what I mean? And that’s the good back-and-forth that we have, is that I have to be so loyal and Nug is just taking the attitude that, yeah dude, Baratheon’s just a party guy. He’s just an old frat boy.

CM: And that’s the advantage that we have, doing parody. Kevin Whalen can take Peter Bealish and just make him, essentially pootytang. Take him to the extreme of this pimp character. And he totally gets away with it because he plays it so well.

P&C: Each show revolves around a different part of the storyline. How much is improvised and how much is true to the original books?

CM: We have a specific series of moments from the first season that we need to hit, but the content of each episode is completely improvised.

P&C: Game of Thrones has a dark quality that’s been compared to Mad Men and The Sopranos. How does that translate to comedy?

CM: I think that you can get away with so much if you tell people they’re about to see a comedy. You can take people to a real emotional place, to a real dark place, if you hold their hand and tell them “Don’t worry, it’s all in good fun.”

That’s my big philosophy with art and theatre, and I do it with Bad Dog and Sex T-Rex.

KS: Yeah. My thing is always when you take the work seriously, then the audience sees you taking it seriously, and they go, we will now commit to their commitment.

Like when Bruce [Hunter] walked in as Tywin in the last [season].

Bruce has been doing comedy and writing and directing in this city for longer than some of us have been alive. So when he walks in with a stage that’s packed with like, Aurora Browne and Paul Bates and Nug, I just remember him taking the piss out of everyone. No one could say anything to Bruce. Just like Tywin.

When he turned to Alice and said, “Who’s this? Has anyone raped her yet?” And just that, that’s a very dark line! It’s very true to the world, but it’s still pretty dark man. But it worked.

CM: For one of your first lines on stage. When you come in as character…and that’s the first thing you say? I can count on one hand the number of people who could pull that off.

KS: I think that’s what the darkness translates to. It translates to knowing when you can take advantage of it.

CM: And we don’t shy away from it, either. Our world is just as dark as theirs is. Bran still gets pushed off that tower. People die.

I’m looking forward to taking that to the next level in the second and third seasons, because the world gets so much worse.  And I know that we’ll be able to pull it off because the comedy is so good.

You can see Throne of Games at the Next Stage Festival, January 2 – 13. 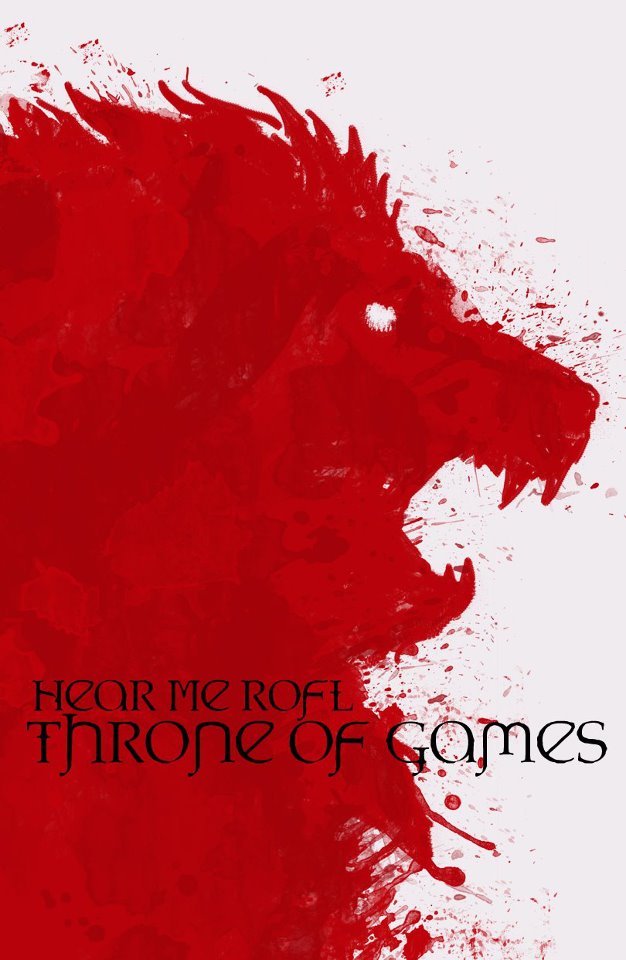