Live From The CenTre Lives Again

The CenTre revolves around a non-profit incubator for small and socially progressive businesses. It’s the perfect platform for some of Canada’s funniest improvisers to unleash a plethora of hilarious characters. Think Comedy Bang! Bang! with a social conscience.

You can listen to the latest episodes here.

Photo © Live from the CenTre

Web Series: Live From The CenTre 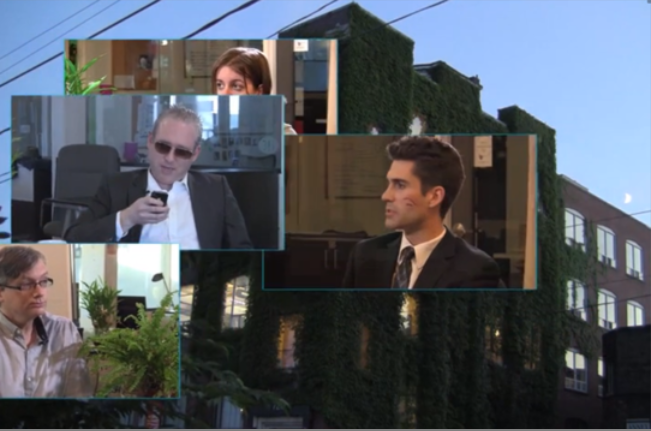 Here’s to the crazy ones. The misfits. The rebels…

No, not Einstein, Earhart or Ghandi; we’re talking about the people who make up The CenTre.

The CenTre provides a platform for “alternative” businesses who want to make the world a better place, each in their own unique way. Things like GuyWhoBringsAGuitarToAParty.org. Parking Doctors. And the Animal Literacy Group.

Baker, Boyer and Cawley play a multitude of offbeat characters so convincingly, you’ll swear you’ve met some of them. Especially if you’ve spent any time in Trinity Bellwoods.

Smith meanwhile, plays voice of sanity and Host, B. Gordon MacKie. According to Smith, the series is “99 percent improvised.” Take that, Judd Apatow.

Since its debut March 1st, the show has already garnered over 40,000 views and is apparently a big hit in Europe. Which makes total sense really, when you think about it.