Whose Harold Is It Anyway?

It took me a while to get the hang of it, but all of a sudden…BAM! I felt like Lisa Simpson at Duff World (“I can seeeee the myOOOOOOsic!”).

It was awesome. But then a funny thing happened.

After having some great shows early on with my team, our Harolds started to suck. 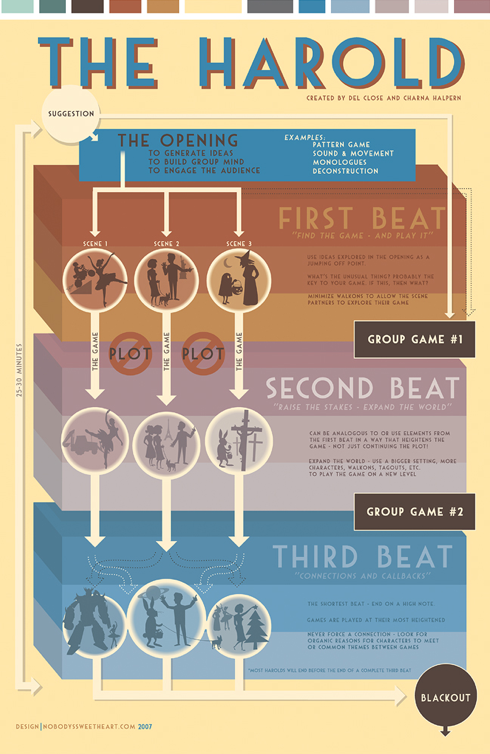 Our coach had a very specific approach to the Harold. We spent months just doing organic openings, while he quizzed us on identifying the “theme.”

When Cameron watched my team perform, I’d ask him afterwards what he thought.

Not having fun. Not entertaining the audience. And certainly not being in the scene. We were doing everything “right,” but our shows were marked by hesitation and worse (in my opinion), trying to be clever.

The more I tried to analyse sets, the worse I became as an improviser.

I missed edits my body told me to make, forced connections or failed to make others, and spent a lot of time staring at the floor.

It wasn’t until I discovered the organic, respond-in-the-moment style of improv taught by David Razowsky, Jet Eveleth, Susan Messing, Todd Stashwick, and Greg Hess, among others, that I found a way of performing I understood.

It was intuitive, not intellectual; physical, versus formulaic. Most of all, it felt effortless.

When I told my coach how I’d seen and made connections without trying, he shrugged. “Anyone can connect the dots after the fact.”

It made me think of The Artist’s Way

. In it, Julia Cameron talks about writing a screenplay. There was a gun in the opening scene and she didn’t know why, but she listened to her muse and wrote it in. As she neared the end of the script, everything came together and the gun made complete sense.

I realized my coach and I had fundamentally different ideas about long-form…and that’s OK.

That’s why I think it’s incredibly important to experience different approaches. Even if you love the way you were taught, it’s good to see how other people play.

A Harold By Any Other Name

Cameron and I took a workshop a few years ago with Charna Halpern, to learn a form called Cat’s Cradle.

Like the name suggests, Cat’s Cradle is a flexible structure that can take many different forms. UCBT describes it as “a fluid, unfolding symphonic long-form of living environments with all performers onstage all of the time.”

There’s an opening, but no set beats or group games, per se. The structure is as simple or as complex as it needs to be.

She went on to say that the “training wheels” structure of Opening, First Beats, Group Game, Second Beats, Group Game, Third Beats was just her and Del’s way of teaching people callbacks and connections. It was never intended to be a rigid format.

This was very exciting to us.

Suddenly openings could be anything, not just monologues or organic “whooshing.”

Beats and group games were a choice to be made in the moment, not something that had to be planned ahead.

If the co-creator of the Harold was saying it was more than just a set structure, then the sky was truly the limit.

“Life is a slow Harold.” – Truth In Comedy

In the end, I don’t think it matters where or how you learn the Harold. Not really.

The nuances may be different (at iO, the characters and relationships are heightened in Second Beats; at UCBT, game of the scene is heightened), but the basic structure remains the same.

What matters, once you’ve grasped the basic principles, is that you continue to learn and grow, and stay open to new possibilities. Including the possibility that what you learned is not the only, or best way, to do a Harold.

Organic or structured, left- or right-brained, as every Harold demonstrates, we are all connected.

The Book of Harold

is the Penguin Classic of improv books. I’d only ever done short-form when I read it, and it was a year before I did my first Harold, but I knew I wanted to learn more. If you’re just beginning your long-form journey, this is a great place to start.

, now available from the UCB Store. Written by Matt Besser, Ian Roberts and Ian Walsh, it includes explanations of the Harold and other long formats.

The book is designed for beginners, as well as experienced improvisers, and with the surge of interest in long-form worldwide it’s sure to become a bestseller.

Another recent addition to the canon is Long-Form Improv: The Complete Guide to Creating Characters, Sustaining Scenes, and Performing Extraordinary Harolds

Frustrated by the way the Harold was taught to him, Hauck decided to find his own method of teaching and performing it. Using a combination of games theory, mathematics and military strategy, he developed an approach that reveres structure above all. Among other things, Hauck recommends:

• Getting the “who, what, where” out in the first sentence

• Taking care of your scene partner before yourself

• Monitoring scenes to ensure they have “bilateral agreement”

I confess to breaking out in hives around page 5. Structure is one thing; rules are another. That’s not to say his approach doesn’t work. Judging from the book’s reviews, it works gangbusters. It’s just not an approach that works for me.

As for learning Harold structure, Joe Bill likens it to driving a car.

Such mastery might take months or years, depending on your instructor, your skill set, and your Harold team’s chemistry.

The good news is, once you’ve learned the basics you can start to develop your own style. You might even want to create your own format. The Bat, The Movie, The Living Room, The Deconstruction, The Beast, Armando and many other forms were all inspired in some way by the Harold.

Click below to see one of the best Harolds ever captured on film, performed by legendary iO team, The Reckoning.