P&C: How did you get started in improv?

BN: I had an awful break-up my final semester of college. I had isolated a lot of my friends to spend time with my then-girlfriend, and the ones I did keep in touch with were moving away from St. Louis after graduation.

During that period, I was feeling sorry for myself and started listening to WTF with Marc Maron (those two things are unrelated). He was interviewing Jon Favreau, who mentioned getting his start through improv. I remembered I’d always enjoyed my acting classes in high school, and had performed in several plays. I thought about getting back into it, as a way to make friends and as a creative outlet.

When I got home that afternoon, I immediately Googled “improv in St. Louis,” clicked the first result, and signed up for the classes that were starting that weekend. I thought, “What’s the worst that could happen?”

P&C: Why did you write Improv ABC: The A-Z Guide to Becoming An Unstoppable Improviser

BN: Back in April of this year, I was having a lot of trouble working my way through the Upright Citizens Brigade Comedy Improvisation Manual

. It’s packed with great info, but it’s dense. It feels like reading a textbook. But other than that manual, most other improv books I’ve read are all about theory and encourage practice.

Where I am now in improv, that’s the kind of book I’m looking for. But when I was a student, I wanted to get really good really fast. I know everyone wants that, and obviously, that’s just not how it works. But there also wasn’t much in the way of resources about practical advice to improv. So I decided to write the book I wish I had when I was coming up and learning the craft – something practical, straightforward, and most importantly, fun. 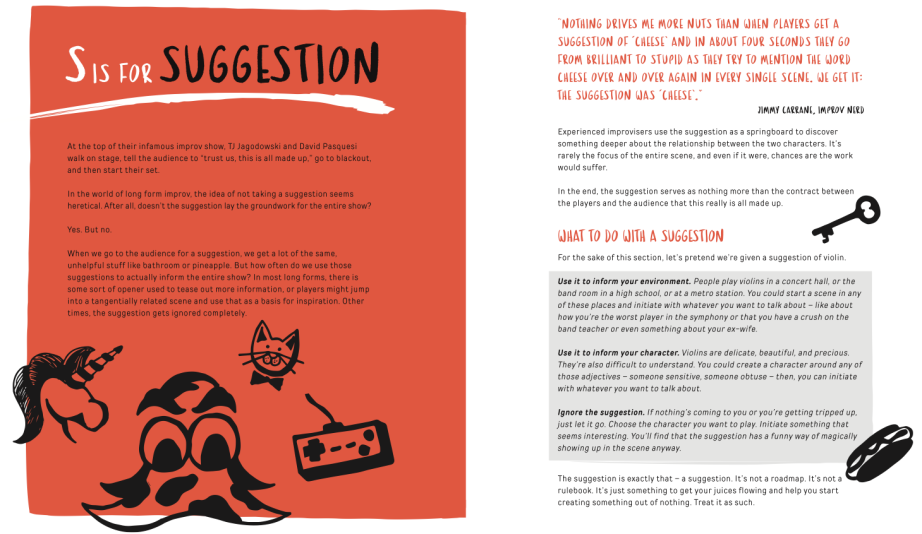 P&C: What makes a great improviser, in your opinion?

BN: I think the single most important trait of the great improviser is that they don’t have an agenda. They don’t need to prove to the audience or the team that they’re funny. They’re kind and generous. Their only goals are to have fun and make their scene partners look good.

I hope that people come away from my book with some practical tips for creating character, having a point of view, etc. But I also hope they leave knowing that improv is just as much about who you are as a person as it is how well you can find and heighten the game, or how well you audition.

P&C: Who would you say has been the biggest influence on the way you improvise?

BN: There’s a really great improviser in St. Louis, Andy Sloey. I remember watching a scene between him and another improviser, Kevin McKernan (here it goes… someone else’s improv story, ugh) in which one played a paramedic and the other a female by-stander. What struck me about this specific scene was that, despite their characters, they were just having a regular conversation I could see them having at the bar after the show. In that moment, I realized I could be myself and have a real conversation on stage, and that was way funnier than trying to be funny or think really hard about the game or whatever.

P&C: How has improv helped in other areas of your life?

BN: There are so many ways. I could go on forever. But I think most importantly, improv has given me the confidence to “yes and” my own ideas. To believe that my contributions are worthwhile and add value to the world. Without the confidence I gained from improv, I never would have started my blog or written my book.

BN: Truth In Comedy by Del Close and Charna Halpern. It was the first improv book I ever read, and I love how applicable it is to both improv and real life. Although I am excited to read TJ and Dave’s new book, Improvisation at the Speed of Life

P&C: Do you have any plans for a follow-up? Say, Improv by the Numbers?

BN: I would like to write a follow-up, but right now I have some other projects in the works, including a podcast that goes deeper into the themes I discuss on my blog: how improv can make you more creative, and how it can help you in real life. You’ll have to wait until next year for Improv by the Numbers or whatever book comes next. But in the meantime, if you want to check out more of my writing, sign up for I’m Making All This Up‘s weekly email. Every Monday morning, I’ll send you the latest from my blog for a little creative boost to start the work week.

. (Spoiler: “ABC” does not stand for “Always Be Clap-focusing”)