Stick This In Your Ear: The Improv Podcast Round-Up

Once upon a time, there were surprisingly few online resources for improvisers. Now there’s a plethora of awesome podcasts that cater to our favourite cult. Best of all, they’re free! Thank you, internets. 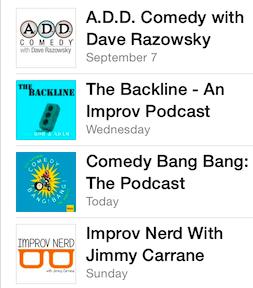 Improv guru David Razowsky hosts this series of passionate chats with friends he’s amassed in his 30-plus-year career. While big-name guests like Colbert, Carell, and Nia Vardalos may snag your interest, less-familiar luminaries are every bit as entertaining. Actors, writers, producers, teachers, and other folks share their stories of life on stage, screen, and behind the scenes.

Are you ready to laugh? Ready or not, this show will have you in stitches. A staple of New York and LA’s improv scene, Daly is one of the funniest yes-anders out there. Using characters created on Comedy Bang! Bang!, his lightning-fast wit and hilarious guests make this podcast worthy of repeat listenings. There are only nine episodes so far, but fingers crossed he’ll be back for another season.

The Backline with Rob and Adam

In the mood for some in-depth, honest, insightful info, served up with a side of laughs? Rob Norman and Adam Cawley’s real-life camaraderie makes their podcast a pleasure to listen to. Each week they offer a wealth of anecdotes and advice on everything from shame to shortform, friends to festivals, acting, time travel, and much, much more.

Word to the wise: Callbacks and inside jokes are rampant, so if you’re new to the show, do yourself a favour and start at the first big Bang! Bang!

Like an improvised “Bat,” Matt Besser’s podcast creates memorable theatre for the mind. Each week, Besser and his guests improvise based on audience suggestions from the web. Regulars Andy Daly, Zach Woods, Lennon Parham and Tim Meadows, along with special guests like Todd Glass, Jason Mantzoukas and John Gemberling make for some very fucked-up but always funny stuff.

Chicago-based Jimmy Carrane’s mix of interview, improvised scenes, and post-improv analysis is as fascinating as it is unfiltered. And like his blog, Carrane isn’t afraid to delve into the dark places of his guests’ souls. With over 100 episodes so far, guests include Mick Napier, TJ and Dave, Susan Messing, David Razowsky, Key & Peele, and Bob Odenkirk, to name just a few.

Stephen Perlstein is the first to admit he doesn’t know everything about improv, so he interviews people who do to learn more about the craft. If you’re looking for something that’s more theory and how-to, this is a good one to have in your arsenal. Will Hines, Billy Merritt, Matts Besser and Walsh, and Tara Copeland are among the 50+ guests to date.

In this weekly podcast, Stroth invites someone from the improv/acting community for a live interview at ACME Comedy in LA.

While not technically improv, no podcast list would be complete without Maron’s acerbic interviews. With over 500 episodes to date, WTF revived his career and launched him on a new trajectory. And while not everyone’s a fan (see Maron and Michael Ian Black’s twitter feud), there’s no denying his guest list and interview style reign supreme.

Marshall Stern and Nancy Howland Walker host this series of podcasts about the art of Improvisational Acting in general, and how Zen thought relates and helps you as an actor, in particular.

(Tip of the hat to Oliver Georgiou for Zenprov, and Alex Wong for Miles Stroth!)