The Improviser’s Guide To Promoting Your Show

Few things are sadder than performing to an empty room.

Unless you’re TJ and Dave, you need a little planning to ensure a good turn-out. Here are some tips that can help.

Who are you performing for? Is it hardcore improv nerds, or comedy lovers in general?

Is it a monthly show with a built-in fan base, or are you trying to get fresh blood (and votes) for Cage Match?

Just like advertisers, you need to define your target audience. “Anyone with five bucks” is not a demographic.

Before you invite all 2,031 of your “friends,” ask yourself if Aunt Myrna, the guy you went to junior kindergarten with, and those eight ‘bots would really come.

Quality Is Job One

A friend of mine saw a show recently, and was pleasantly surprised by how much he enjoyed it. “There’s so much bad improv out there,” he confided.

Anyone can have an off night, but when you don’t commit to doing your best, it reflects badly on all the awesome sets other improvisers are committed to.

Have you and your team rehearsed? Are you familiar with the format you’ll be playing?

Learning stuff on the fly with strangers may be fine if you’re a pro, but for many people, familiarity with the cast and structure are key to a good show. Just because they’re called make-’em-ups doesn’t mean people want to pay to watch you figure shit out on stage.

Be professional. Book a rehearsal (or several, depending on the scale of the show). If it’s a one-off (a fundraiser, for instance) or a jam-type situation, at the very least try to get there an hour beforehand, so you can meet and bond with your cast mates.

There’s a delicate balance between not promoting your show enough, and promoting it too much.

• Don’t create a Facebook event a month in advance, and promote it every day until the show.

• Do promote judiciously. If everyone on the team has the same circle of friends, you don’t need all seven of you to mention it in your status.

• Don’t post the wrong time, date, or venue. (You’d be surprised how often this happens.)

Even a well-written e-vite can get lost in celebrity gossip and kitten videos. One way to break through the clutter is an eye-catching poster.

Your poster should reflect the show and/or team’s character. You can use it online, as well as print copies to put up in bars, theatres, and coffee shops.

Keep the messaging simple; it’s a poster, not a blog. The name of the show, date, time, and place are fine. Include a website if you have one (but only if it’s up to date).

Again, keep your audience in mind. Don’t assume everyone who sees your poster will understand what you’re selling. Before you joined the improv community, would you know what the fuck a “Harold Night” was?

Unless your show is strictly for other improvisers, you need to spell things out a little. It can still be a tease though, like this awesome example:

At the other end of the logic spectrum, fans of Standards & Practices love their boundary-pushing style. Kevin Whalen creates promo posters that reflect the team’s surreal sensibility.

Rob Norman and Adam Cawley are to Toronto’s improv scene what James Franco and Seth Rogen are to…uh…each other. This stunning artwork captures the duo’s brooding bromance and colourful imaginations perfectly.

One of our favourite campaigns was for Ghost Jail Theatre. They produced a memorable series of posters created by overlaying shots of two different improvisers, usually a male and female. The effect was haunting, intriguing, and completely different than everything else in the community.

The next season, they created hybrid images of three players. The slightly off-kilter results stopped passersby in their tracks. (The posters were so popular, they were stolen within hours of being put up.) 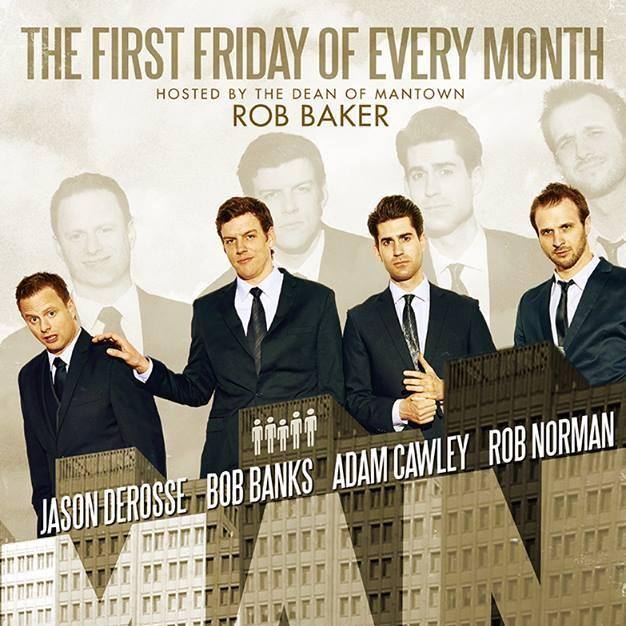 Doing another gig close to the date of your show? Ask the MC if they can mention it when they intro you. Better yet, direct people to your Facebook event page. (You don’t really expect them to remember show details after five beers and some Jägerbombs, do you?)

Set It In Motion

If you really wanna go all out, why not make a video? Kevin Whalen and Matt Folliott created this stop-motion short for Sex with Jeremy, a showcase for teams Sex T-Rex and The Jeremy Birrell Show: