Marcel St. Pierre is a founding member and former Artistic Director of The Bad Dog Theatre, a Second City alumnus, and one half of bacon, music and comedy duo, Egg Zeppelin. You can catch them with special guest-slash-improv legend Colin Mochrie at Comedy Bar on Wednesday, December 5. 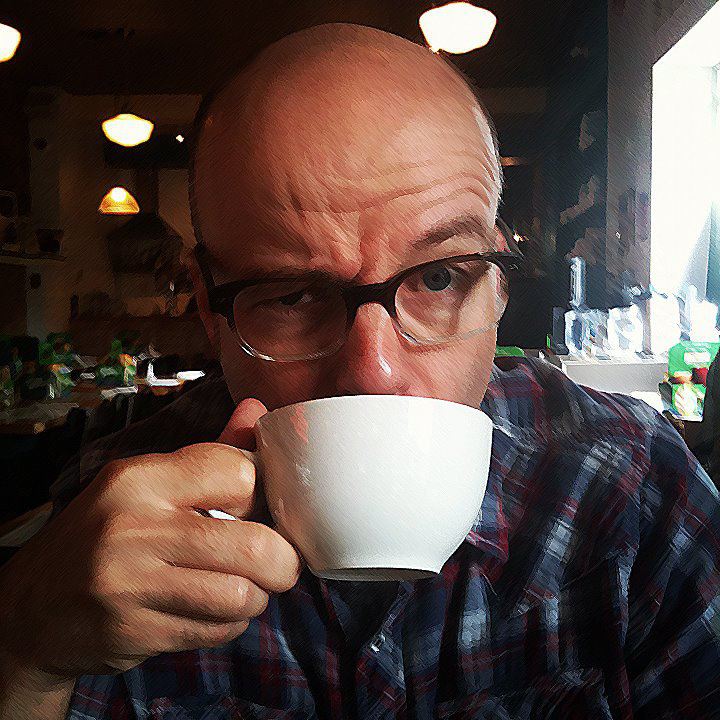 People sometimes ask me, “Has improv changed since you started?”

2012 marks the 21st year that I’ve been doing improv – and by that I mean regularly – at least a couple of times a month. I feel really lucky to still love doing it, and there are probably a dozen or so improvisers I know in Toronto who are right around the 20-year mark, too, and a handful more that are probably around or beyond the 30-year mark.

Other than the occasional audience member being eaten by stealthy dinosaurs that raided our improv caves back then (clever girl…), I’d say a lot of things are still the same in terms of what MAKES a person an improviser. And by improviser I mean a comedic performer who CALLS themselves an improviser first.

I know improvisers today who go from show to show, and sometimes, two to three shows in one night, doing one set at say, The Black Swan at 8 pm, then going across town to do a 9:30 Bad Dog show at Comedy Bar, then going even later to Unit 102. The next night they’re on a Harold team with Impatient Theatre Co., and then it’s a duo rehearsal for a show in two days at The John Candy Box. Luckily it’s not heroin, but clearly, at that stage of the game, improv is your addiction. YAY FOR YOU!

This was pretty much the road I took when I started back in ’91. I was taking classes at least two nights a week, and began teaching intro classes in exchange for other free classes. Then I was doing lights and stage managing shows one or two nights a week with The Chumps at Big City Improv* on Queen Street.

After doing several seasons of Theatresports (which for years was the only game in town other than Second City), I’d been lucky enough to be in one of the city’s premier troupes, The Stand Ins, who took over Big City Improv after The Chumps moved on. We had four weekly shows for nearly a year before Big City closed in 1996.

After that, we continued to produce sketch and improv shows for several years, and guested wherever and whenever we could. We were hungry for stage time and we fought hard to get it.

And that would pretty much be the case until May 3, 2003, when The Bad Dog Theatre Company put up a stage and workshop space on The Danforth. That event was a big game changer in Toronto improv.

I think the current scene in Toronto really flourished because of the existence of an improv training institution that not only offered excellent training, but added as its mandate the addition of giving stage time not only to the cream of the crop, but to students at nearly every step of the way in their training. Imitation is the highest form of flattery, and today there are at least five or six places you can name in Toronto that do this, because it’s such a successful model.

What this has led to is what I think really has changed in Toronto’s improv landscape: the sheer amount of stage time available to improvisers, and in some cases, actual sustainable gigs where you get paid to improvise, which allows IMPROVISERS to continue to be IMPROVISERS!

It’s something I couldn’t even dream of when I started, and it’s a blessing in terms of just being able to get up and do stuff and get better in front of an audience. I think today’s newer improvisers sometimes take that for granted, and when they do, it can lead to some of the laziest, shittiest improv I’ve ever seen.

You know the shows I mean; shows that are promoted by their producers as “the best in the city,” with casts who really have no business being on stage yet, feeding each other’s bad habits and ultimately delivering a product that not only annoys good improvisers watching you, but also makes non-improvisers in the audience hate improv and take their comedy money somewhere else (or stop going to comedy altogether, chew on that!).

If you are that type of improviser or producer in today’s improv scene, you’ve been lucky to have the chance to do that kind of crap more than once and still have places to play. Please knock it off.

In the first 10 years I was doing improv, sometimes there was only one show per week – or even per month. This obviously made us more competitive and only the fittest survived. Ultimately I think the downside of this Darwinian scene meant that we lost out on some potentially great players who needed more time and nurturing to get better. It’s tough to be a nurturing community when you’re all fighting for stage time. So, overall I wouldn’t go back.

I think the improv community is more open and friendlier now, more nurturing and more vibrant than before, and more open to players of all stripes and abilities. And that’s a good thing. I think overall the current amount of talent on many improv stages in Toronto is very high, and it’s nice to have a mix of experience levels to play with…and I’m always learning new things from watching and playing with new players.

My advice to up-and-coming improvisers in Toronto is to never take the amount of stage time you have at your disposal for granted. Take improv seriously because you might be doing it 20 years from now! Play to the top of your intelligence. Be grateful for those in your midst who sacrifice the joy of being able to just show up and perform for the usually thankless job of producing stage time for the rest of you.

To all improvisers: I urge you, know where you are in terms of your experience and ability, and get training OTHER than on a stage. Take more classes, and not just from visiting superstars. Those are good, but consistent training and practice is key. And whenever possible, hug your improv producers.

To all improv producers: Know your show and don’t promote it as “the best improv in the city” if it isn’t. You give improv a bad name to paying audiences who will go somewhere else next time when you do.

And to everyone else: See more improv, and if you even think you might like to do it, come out and take an improv class. Obviously, I think you should do it at Bad Dog Theatre Company, but you get the idea.

* Did you even know there was something called Big City Improv at Queen & Bathurst way before The Big City Improv Festival existed? Now you do. It was a long time ago. All the audience was eaten by dinosaurs.