Tom Vest has been improvising in Toronto since 1997. As one of the admins of the TJ & Dave fan page, he has been dubbed the “Official Overlord of the Electronic TJ & Dave Empire” by TJ.

I’ve been a fan of TJ & Dave for a few years now, and yet for the life of me I can’t remember when and how I first heard about them. It must’ve been around 2004 on the “yesAND…” forum boards. The discussion was probably something like “Best Improviser(s) in the City.”

In those days I was even more dedicated to unravelling the mystery of improv and all its secrets than I am now, so when I came across the comments on why they were so good, I was intrigued. It wasn’t long after that I went to their Myspace page (yes, 2004 seems about right) and purchased a few of their shows on DVD. They were everything people had said they were.

When they came to Toronto for a workshop and show, I was asked to pick them up at the airport. Some people thought I did it so I could ask them a bunch of improv questions, but the opposite was true. I picked them up so they wouldn’t have to talk about improv at all. I can’t imagine anything worse than having to travel to another city, only to get trapped in a car, answering questions about improv the whole way.

Instead, we talked about the details of what was right in front of us: the outdated decor of the waiting lounge, the parking lot and its confusing enter/exit lanes, various sights on the way in to Toronto. David admired the wind turbine at Exhibition Place and was very outgoing, while TJ was more quiet. They were both pretty laid back and fun to talk with.

When it was time for them to leave a few days later, I drove them back to the airport. This time the conversation went all over the place. It felt a bit like doing a three-person set, only no one was watching.

Last summer I performed with my group The Seedlings at the Del Close Marathon. On my last day in New York, I was walking down Fifth Avenue towards the Flat Iron when I spotted David about to enter a coffee shop. My mother and brother were with me, and they continued walking as I stepped over to say Hi. When I called his name he turned around and recognised me right away, to my relief. It’s always fun to run into people, but he seemed genuinely pleased to see me in a way you don’t encounter often.

We talked briefly before I mentioned I was on my way to the airport, and had come to the city with my mother and brother. Immediately David wanted to meet them, so we went over and I introduced everybody. We’d gone to see him perform with TJ the night before at the Barrow Street Theatre, and it was probably the best 50 minutes of improv I have ever seen. My mother and brother both liked it, and had fun talking about their favourite moments after the show.

Without doubt, David has a unique way of paying attention that makes you feel like you are really being listened to. It’s a really genuine way of relating to another person, and something that’s very rare. To take time to meet my mother and brother wasn’t something he had to do, but he has a way of making you feel like he has all the time in the world for you.

I came away from the encounter wanting to have that kind of “availabilty.” To be more open, genuine and considerate. It’s qualities like these that help to make a TJ and Dave show what it is, and I don’t think they could do it on stage if they weren’t like that in real life.

When they returned to Toronto for a show at Second City, they both spotted me in the line-up and came over to talk. After the show TJ invited me out with him and David, and we went to a local bar where we talked about a variety of things. For such funny guys, I really like how there is no “ON” button. The conversation may be funny, but nothing is ever forced and the easiest thing I found was just to “go with.” (TJ also paid for my 7Up before I even knew the bartender had asked. You’ve got to be alert with these guys!)

Before the night was over, we got a picture of the three of us, and while there may be a story behind it, that’s one I’ll keep to myself. : ) 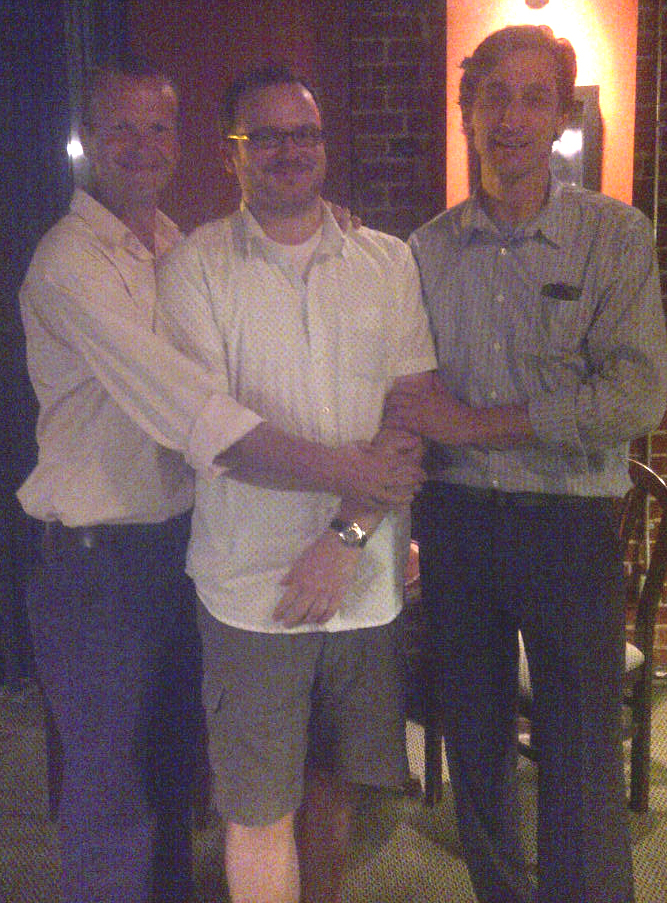